You are here: Products Forever and One Week by Caroline Cairn 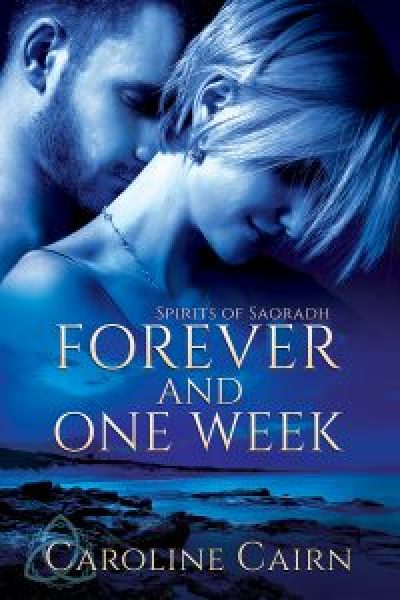 Forever and One Week by Caroline Cairn

The Spirits of Saoradh, who carry the guilt of a crime they committed when they were alive, now spend their ghostly days in the Void, dark nothingness where time and space are distorted. Until they get bound to a human. As often as needed, that human can call them to the real world, ask them to grant a wish, then send them back to the Void. The Spirits also have to follow strict rules or be punished, unaware that they can earn their redemption through a selfless sacrifice.

Spirit Logan despises the obedience he has to show to his humans, and prefers the enjoyable solitude of the Void. For three years, he has managed to threaten them into severing their bond, thus having his memory wiped of their existence. Except his latest human, an emotionless woman with a secret past, isn’t scared of him. Worse, she doesn’t care about his ability to make wishes come true.

Tessa, a twenty-six-year-old nursery teacher in Fort William, Scotland, doesn’t expect a sullen ghost only she can see and touch to burst through her solid defences. Both dismayed and intrigued, she offers Logan a deal he can’t refuse: to live with her in the human world for one week, at the end of which she will agree to release him.

Slowly, Tessa braves through the safety of her detachment towards people to show Logan some kindness. But the more her feelings deepen, the more Logan increases his distance…

Thankfully, these days, she veers towards the happy-ever-after finale in a glorious orange and red sunset.

So I wrote it.

“What the hell do you want?”
The sharpness of his voice didn’t shock her as much as him turning up in her dining room. She presented the coffee tin to the Spirit lurking in the shadowed corner. She didn’t notice herself pressing on the metal until it created a dent.
“I would like a full one, please.”
If he could fill the can with the same beans he had used the last time he had granted her wish, she would cry in happiness. His coffee had tasted like smooth chocolate with a hint of bitter nuttiness. The fruity flavour of her usual brand had suddenly vanished to blandness.
“Are you asking for freaking coffee again? Are you serious?”
Her extended arm began to ache. “Please, and I need some painting supplies, too.”
He crossed his arms. She couldn’t watch the expression on his face as it was bathed in darkness, but his posture was relaxed. “I thought you didn’t need me.” The sarcasm was drenched in triumph.
She brought the empty tin to her chest. He hadn’t been cross at her for her lack of reaction yesterday. He had been cross because he had been unable to rebuff her. “I take it you won’t give me anything.” She threw the tin in the bin.
Feet spread out in front of her fridge, she opted for the last of the yoghurts, the lemon flavour one she hated. Why the supermarkets insisted on using this vile fruit in their value range, she had no idea. Paper lid removed, she tucked into her breakfast without enthusiasm, standing in the middle of the room.
“Are you kidding me?”
She carried on eating, bracing herself for what was to come.
“Hey—” He grunted with annoyance. “Hell, I don’t even know your name.”
“Tessa.” The slightly acidic and too-sweet yoghurt churned her stomach.
“Well, Tessa, you need to wish for it. I can’t get you anything until you use the proper word. Say it.”
She plunged her spoon in the foul creaminess. “What’s the point? You’re going to refuse me anyway.”
His arms unfolded as he levitated, crossed-legged, elbows wide. His fingertips drummed his thighs with increasing speed. “Try me.”
She didn’t bother replying. She knew his kind. People who had to have their way because they considered themselves so much smarter than others. Tessa dealt with them with casual indifference, because that meant they wouldn’t search for trouble. They would leave her alone.
But him?
He grated that part of her she had put to sleep a long time ago.
She didn’t like it.
Not one bit.
Yet it compelled her, like a chickenpox itch you know you shouldn’t scratch but can’t resist.
Once she had dropped the empty yoghurt pot in the bin, she proceeded to wash her spoon, aware of a glare cutting a hole at the back of her head. She wiped the cutlery dry with slow movements, blew on it then polished it. The sound of fingertips on denim was getting louder in her ears. So he was getting frustrated.
She couldn’t wait for his next move.
Water running from the tap, she rinsed her sponge, soaked it in a lavender-scented cleaning spray and wiped every nook and cranny, from the sink to the kitchen counter, with deliberate fussiness. She lifted her kettle and her toaster, pushed her plant to the left, then back to its place, and scrubbed those pesky corners. The cupboard doors were next, after a few more sprays of lavender.
If I started singing, would that be too much?
His hoarse breathing had turned into a low growl.
But she was too far gone to stop. So when her wrist got captured by a powerful hand, an unexpected thrill coursed through her.
“Say it,” he ordered. “Say how much you wish for coffee.”
His grip was painful. Implacable. It brought her back to reality, chased away that stupid excitement she never should have pursued. Logan was just like everyone else. No doubt he would resort to violence because she had taunted him. Because she hadn’t done as she was told.
So she shut herself down, and let him pull her to face him.
“Jesus Christ, not again.” He yanked his hand away from her.
Images of her mother flashed like a nightmare. She had to concentrate to keep her vision focused on him.
“How can you go from provoking me to this lifeless thing?”
She rubbed her wrist, where his print had marked her flesh. He could scream as much as he wanted and take out his anger on her. A calm resolution had flooded her senses. It shielded her soul. Nothing would hurt now. The soft glow of his eyes had intensified to blazing gold, a sheer contrast to his reddening face. His eyebrows were so low they could cast their own shadow over his cheeks. And his lips…
A painful twinge hit her in the throat.
His bottom lip was cut, the blood dried up as a crust. But it was his neck that had her stumbling back against her sink. It had two perfectly parallel, crimson crevices crossing from one side to the other. She was no expert, but these scars were fresh, and made by a razor-sharp blade. She could swear it.
His tirade halted abruptly.
He seemed to hesitate between retreating in the corner and standing his ground. That he chose the latter didn’t surprise her.
“That’s none of your business,” he replied to her silent question.