You are here: Products Forever a Bridesmaid by Courtney Hunt 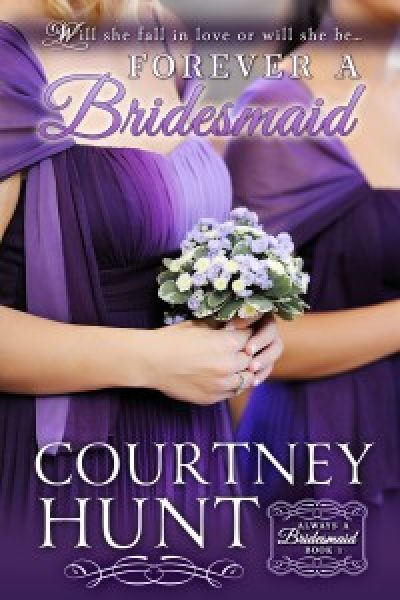 Forever a Bridesmaid by Courtney Hunt

Will she fall in love or will she be…Forever a Bridesmaid?

From romance author Courtney Hunt comes the Always a Bridesmaid series, a fun, contemporary romance series about professional bridesmaids who end up finding their own happily ever afters…

Erin Delaney’s struggling professional bridesmaid’s business needs an infusion of cash—quick—so she can support herself and her younger brother. When she gets a last-minute contract for a week of wedding festivities in Savannah, she jumps at the chance to create the perfect wedding. But she didn’t count on the groom’s disapproving brother…

Charming architect Matthew Westbrook will do anything to stop his younger brother’s pell-mell rush to the altar. He just didn’t count on falling for the smart and sexy bridesmaid that his mother hired…

When his matchmaking mama offers to sweeten the deal, Erin will earn the money she needs, if she can manage to keep Matthew from destroying the wedding. But, when her secret deal comes to light, will she lose her chance at love…in Forever a Bridesmaid, first in the Always a Bridesmaid series?

When Courtney isn’t writing, she enjoys photography, sailing, and reading. She can never resist a craft store. After an early stint as a Disney cast member, she is a life long Disney addict. She’s also an avid fan of Star Trek, Star Wars, Sherlock, Harry Potter, Buffy…just to name a few.

During my family’s annual trip to Myrtle Beach in 2014, my sister, a bridal makeup artist, and I chatted about recent wedding trends and she mentioned the new trend toward hiring professional bridesmaids. Within a few days of splashing in the surf, Erin Delaney and her merry band of professional bridesmaids were chatting away and I was taking notes and along for the ride.