You are here: Products Forced Entry? by Bill Lockwood 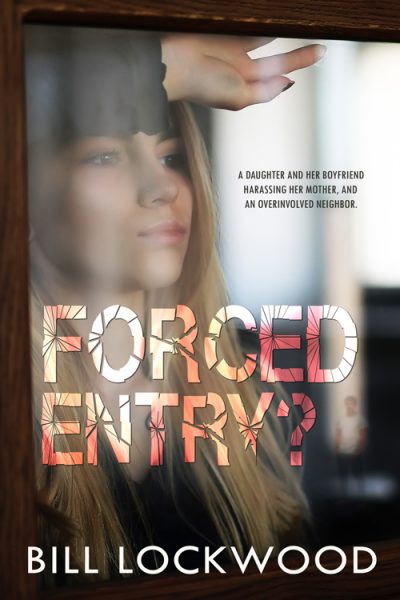 Henrietta, a twenty-three year old has moved in with her old actress mother on the coast of California. The daughter is in hopes she will inherit her mother’s fortune. To hurry that along she enlists a young man she has met at a party. She has him leave strange verses that hint at the dark arts. The guy is more interested in Henrietta going north with him where he has a new job waiting. The old actress calls on her helpful neighbor, Max, to help solve the puzzling events. As the pursuit heats up Max enlists the help of his girlfriend, her teen age daughter, his grandfather, the grandfather’s friend, and even a coven of witches from next door.

Now a retired State social worker for both the States of Maryland and Vermont. By night He has always been active in community theater and writing. He moved to Southern Vermont in 1992 and became active in the Bellows Falls community. He was the Greater Falls Regional Chamber of Commerce Person of the Year in 2006 in recognition of his work as Chairman of the Bellows Falls Opera House Restoration Committee. He wrote articles covering the arts and interesting people in the Bellows Falls (VT) Town Crier from 1998 through 2006. He also wrote articles for other publications including Vermont tourist magazines. Currently He freelances with the weekly “The Shopper/Vermont Journal” and daily “Eagle Times”. He has had five historical fiction novels published by The Wild Rose Press, “Buried Gold” 2016, “Megan of the Mists” 2017, “Ms. Anna” 2018, “The Monsignor’s Agents” 2020, “Gare de Lyon” 2021, and “Forced Entry?”2022. His short story “The Kids Won’t Leave” appeared in the Fall 2020 issue of “Two Hawks Quarterly”, and “Pizza, Pizza” appeared in “The Raven’s Perch” April 28, 2021.

An older woman I had met through community theater asked me, a friendly neighbor of sorts, to help her with a problem she was having. Her young adult daughter who lived with her was being harassed by an unknown stalker. As things progressed I started to come to the conclusion that the daughter was making it all up. Before that conclusion the daughter suddenly moved away to live with her father w, many miles away. But it all gave me an idea.

Grandpa and Liam dropped off and hid themselves
before Max, Evie, and Cindy arrived on Leila’s patio. It
was almost dark, and a bright moon was rising in the
sky. Max cleared the patio furniture to the sides, and
Evie and Cindy helped him. Leila and Henrietta came
out the big glass patio door. Max instructed everyone
where to stand. Then the witches arrived, a group of
about a dozen, led by Beltane carrying her flute. They
were all in long dark robes. Some carried lanterns lit
with burning candles, from perhaps colonial times.
They appeared various ages. Most of them were
smiling. It seemed they were all ready to have a good
time.
While the witches formed a loose circle in the
middle of the patio, Max and Beltane pulled two chairs
together at the side of the patio away from the house.
They climbed up on the seats. Max pulled on the
reindeer head from the school drama department. The
fake fur around the eye holes made it hard to see.
Wish I’d brought my camera, Evie was thinking.
Then Max and Beltane dropped their robes, and Evie
said, “Oh, my God!”
Max looked over and saw well enough to see
Beltane raise her flute to her lips and give him a nod.
Max raised his arms. “All ye faithful, please assemble!”
he bellowed out, his voice strong despite the reindeer
head. “Let the ceremony begin!”