You are here: Products Forbidden Rose by Vivian Winslow 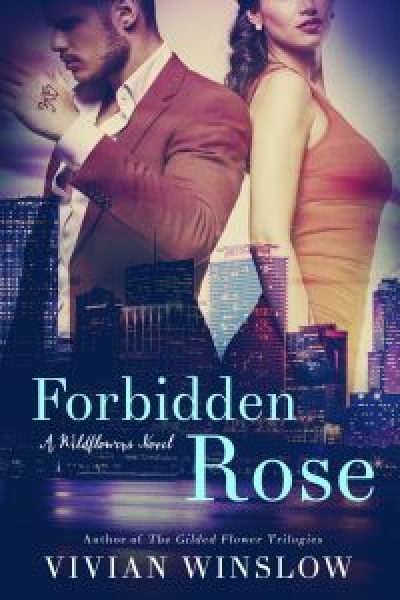 Rosa Cruz, the fiery and ultra-sexy heiress of the Mama Linda Latin foods empire, is determined to create something on her own and not rely solely on her family’s name and legacy. For her new upscale restaurant in the trendy Wynwood neighborhood of Miami, she enlists the help of her childhood friend, the hot, young Cuban-American chef, Eliseo Perez, who’s already made a name for himself on the New York culinary scene. Despite Rosa’s reservations about a forbidden workplace romance with her new employee, not to mention longtime friend, the chemistry between them is undeniable. When the cooking starts, things quickly heat up in the kitchen and the bedroom. But with Eliseo’s troubled past coming back to haunt him, can Rosa and Eliseo hold onto love and keep the restaurant from going up in flames?

Vivian was born in San Diego, California but has spent most of her adult life as the consummate wanderer. Her nomadic life took her abroad to Paris, Madrid, London, Hong Kong, Los Angeles, and São Paulo. After eleven moves across four continents over a span of seventeen years, her journey brought her back to New York City in 2011 where, despite the chaotic pace, she’s managed to make it home for herself and her family.

The inspiration for my books comes from a strong desire to break the mold in the genre, which largely portrays women as weak, subservient and having low self-esteem. Believing that stories have the power to influence attitudes and shift perspectives, I write in order to challenge this paradigm. I don’t mind being considered a feminist although I believe balancing the roles of men and women in literature honors both the masculine and feminine in everyone. But more than anything, my sincere hope is that my books foster the reader’s connection to their unique strengths, gifts and desires.

“Soooo, the host,” he says. “Obviously single, no kids . . . .”
Camila shrugs. “Someone new to the school. I’m not in any of his classes, so I don’t know much about him.”
“You’re being weird. You’re always about extraneous details, and now you can’t say the man’s name or look at me.”
“What? I’m making you a cocktail.” Camila forces herself to look at Jared.
He regards her suspiciously. “You’re a terrible liar, my friend. I’ll figure out what you’re hiding.”
It takes all of one second when he sees Marshall walk into the apartment.
“Oh my God, it’s Mr. Gucci,” he whispers into Camila’s ear.
“Shut up. This isn’t the time.”
“Oh, it totally is,” he replies and heads into the adjacent kitchen to introduce himself to Marshall.
“Good evening. I’m Jared. I work with Camila over at L,” he says, hinting he recognizes Marshall from the bar that night.
“It’s great of you to come.” Marshall casually extends a hand.
“Remind me of your drink of choice, and I’ll be sure to keep your glass full tonight.”
“Yeah, that’d be great. You know how to mix a Metropolitan?”
The bartender suppresses a smile. “Funny. Camila really enjoys those too. I’ll be right back.”
“You fucked him didn’t you?” Jared wags a finger at his friend.
“How can you tell? You spoke to him all of two minutes.”
“While you hid in here like a scaredy cat. What happened? Buyer’s remorse? Hard to imagine though.” He turns in the direction of the kitchen and shakes his head. “No way. With that mouth, the way he stands, and his posture. He’s definitely good in the sack.”
Camila makes a face. “I didn’t realize he was my Professor.”
“I thought you said you weren’t in any of his classes.”
“I dropped it on the first day when I saw him. But what’s worse. He’s my faculty advisor for Law Review.”
“That’s classic,” Jared laughs out loud. So loud it gets Marshall’s attention. He spots Camila standing by the bar. “Oh, hey C.,” he begins to say then clears his throat. “Camila, I didn’t realize you were here.”
“I came early to help Jared set up,” she says, finishing her drink in one gulp.
“This is worse than my cousin’s bar mitzvah down in Palm Springs,” Jared groans to Camila when she approaches him for another drink.
“It may kill you to hear this, but this is one of the better networking parties I’ve been to,” she replies.
“That guy in the corner talking to your boyfriend looks like my Uncle Mordy.”
Camila slaps his arm. “Shut up already. And that man happens to be the foremost expert in Trusts and Estates in the country. I think Oprah is his client.”
“Seriously, honey. You do not belong with this crowd. You are so downtown cool, and they’re uptown uptight.”
“For your information, I just spoke with a woman who runs a legal aid office in the Bronx. She said her work was ‘rewarding’. How many people ever say that about their jobs?”
“Most teachers, except middle school ones, and saints.” Jared leans on his elbow. “So fine, not all lawyers are like my Uncle Mordy. But most of them are.” He checks his watch. “Cover for me a minute. I’m going to the bathroom.”
“I thought I was paying Jared to work, not you.” Marshall says.
“He’s taking his Union fifteen,” Camila answers wryly.
“I guess I can’t interfere with that. I would hate to get a letter from a union lawyer.” He holds up his glass. “Would you mind? I think I prefer your Metropolitans to his anyway.”
“I told you it’s because I don’t sweeten it. Besides, I could use something to do.”
“You’re not giving up so quickly, I hope. There are plenty of attorneys I can introduce you to.”
“So this was a plan to get me to consider a different line of work.”
“Not a plan as much as a hope. But I know better than to interfere in your life. You know what you want.”
Camila looks up when she hears that last word. “Up until recently I would’ve agreed with you. But I realized that I’ve been confusing need with want. I need a job. I don’t know if I want the one I thought I did.”
Marshall furrows his brow. “That’s a tough one. You want to talk about it?” He looks around at the party. More people have arrived. Students are always game for free alcohol, as he knew they would be. However, if he could, he’d snap his fingers and make them all disappear so he could be alone with Camila.
“Maybe later,” she says vaguely, pouring his drink into a clean glass.
Marshall drops five dollars into a tip jar. “Later then.”