You are here: Products FORBIDDEN by Marta Tandori 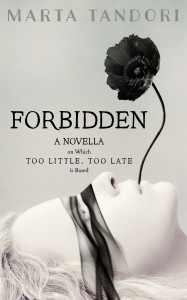 In this psychological thriller, past mistakes, revenge and family secrets dating back to the Second World War threaten to destroy two Hollywood families that are joined by blood and tainted by a scandalous legacy…Maria was the secret no one in Leo Bauer’s family talked about, her existence a constant reminder of his dead father’s shameful deviance. Yet ironically, from the first moment his mother set eyes on Maria, she wanted the girl for her very own – and was willing to go to any lengths to make that happen. And for the next nine years, Leo was able to successfully push Maria’s existence to the back of his mind until unexpected circumstances finally forced a meeting between him and the teenager. Despite Leo’s resolve to remain detached, he found himself drawn to her innocence. He knew Maria was off limits to him and yet, he simply couldn’t help himself. And so began their forbidden affair … until disaster struck, forcing Leo’s family to cut Maria loose.

Years have now passed and Maria abruptly reappears at Leo’s door, almost unrecognizable in her ragged clothing, spouting a litany of barely coherent gibberish. Despite his initial shock, long-suppressed feelings for her begin to stir but when Leo tries coaxing her into his house, Maria runs away in fright. In her flight, she drops a worn photograph and when Leo sees it, he realizes that Maria coming back poses a threat to all of them. He must make a choice … follow his heart or eliminate Maria before she ruins them. Either way, he must find her first…

By the time Marta Tandori reached fifth grade, she was an avid reader and writer with a stack of short stories collecting dust in a box under her bed but it wasn’t until she began studying acting in her early twenties at the prestigious American Academy of Dramatic Arts in New York that Marta realized acting wasn’t really her passion – writing fiction was. What followed was years of writing workshops as well as correspondence courses in writing for children through the Institute of Children’s Literature in Connecticut. She credits the award winning author, Troon Harrison, as the instructor who helped her find her literary voice. Marta’s first work of juvenile fiction, BEING SAM, NO MATTER WHAT was published in 2005, followed by EVERY WHICH WAY BUT KUKU! in 2006. With her more recent endeavors, Marta has shifted her writing focus to “women’s suspense”, a genre she fondly describes as having “strong female protagonists with closets full of nasty skeletons and the odd murder or two to complicate their already complicated lives”. To learn more about Marta, visit her website at www.martatandori.com.

I’m a huge fan of Jackie Collins and all things Hollywood so it seemed a natural progression to want to write a book that had the same flavor as a Jackie Collins novel.

There had been no clap of thunder over the Hollywood Hills or some other ominous sign to forewarn him of her sudden arrival on his doorstep, spouting little more than a litany of barely coherent gibberish.
“Trade for tit’s milk! Tit’s milk for April.”
“What is she saying, Señor?” asked his housekeeper, cowering just inside the doorway.
“How the bloody hell should I know?” Leo Bauer made no effort to mask his irritation at being called away from his dinner guests to deal with something he paid his housekeeper to handle.
“Maria trade,” the woman announced, “priteee picture.” The dirty hand hidden inside her pocket now thrust a worn photograph at him.
The name “Maria” made Leo’s blood run cold. He furtively searched the derelict’s face for some modicum of her former beauty but there was nothing in her features to suggest she had any connection to the woman who had consumed his every conscious thought for a good portion of his adult life.
“I call the police,” his housekeeper announced.
“No!” His voice was little more than a strangled bark. “No police. I’ll deal with her.” Leo waited a beat as he struggled for composure. “Go tell my guests I’ll be with them momentarily.”
The housekeeper scurried off to do his bidding. Only then did Leo turn his attention back to the woman. With a trembling hand, he carefully took the proffered photograph from her. Reaching for the reading glasses in his breast pocket, Leo perched them onto his nose before looking at it closely. Despite the creases having worn deep grooves into the photograph, the image was unmistakable.
“Why did you come back?” he demanded hoarsely. “Why now?”
“Maria here!”
The gravity of those two coherent words shocked Leo’s brain. A multitude of possibilities for her reappearance came to mind but only one made sense. The photograph proved it. She had come back to destroy them, to hold them accountable for their past sins. And yet clear as though her mission was in his eyes, Leo simply refused to belief it. There was a better explanation, a more altruistic one. Maria was going to be his salvation! Her reappearance was divine providence in his darkest hour; a sign that everything would be all right in his world now that she had returned. A sudden gut-wrenching need made Leo clumsily reach for her arm but she easily twisted out of his grasp.
His eyes were tormented. “Why are you afraid of me? I would never hurt you, you know that.”
Despite his reassurances, Maria backed away from him, clearly distrustful.
“I just want to talk to you.” This time Leo lunged at her but missed completely. “Maria – please!”
With a muffled cry, she ran from him, stumbling down the driveway. Leo’s first instinct was to run after her, but then he remembered his dinner guests. With unsteady fingers, he carefully folded the photograph and put it in his pocket, bleakly realizing that he had let Maria get away from him a second time, a mistake he vowed never to again repeat.

Be the first to review “FORBIDDEN by Marta Tandori” Cancel reply