You are here: Products Foerver at Midnight by Isobelle Cate 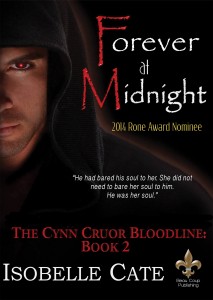 Foerver at Midnight by Isobelle Cate

Picking up where Book 1, Rapture at Midnight, left off – Book 2 in “The Cynn Cruors Bloodline Series”

When Roarke catches a glimpse of Deanna in Dac Valerian’s club, he searches for her in the streets of Manchester just to prove that he hasn’t lost his mind. He is unable to believe Deanna is alive when he’d buried her himself nearly five hundred years before. But when Deanna turns up on the street facing the Cynn Cruor’s headquarters, Roarke needs to know why she’s hid herself from him all these years.

Knowing her secret can only destroy whatever feelings Roarke has left for her, Deanna remains silent until circumstances force her to reveal everything.

Hearts are broken on both sides, but Roarke and Deanna have to work together if they are to find a way of ending Dac and the Scatha Cruor’s power once and for all.

Desire rises and passions are rekindled.

Will their pursuit of Dac lead to another chance at happiness?

Or will it forever tear them apart?

Isobelle Cate is a woman who wears different masks. Mother-writer, wife-professional, scholar-novelist. Currently living in Manchester, she has been drawn to the little known, the secret stories, about the people and the nations: the English, the Irish, the Scots, the Welsh, and those who are now part of these nations whatever their origins. Her vision and passion are fuelled by her interest and background in history and paradoxically, shaped by growing up in a clan steeped in lore, loyalty, and legend. Isobelle is intrigued by forces that simmer beneath the surface of these cultures, the hidden passions, unsaid desires, and yearnings unfulfilled.

Deanna’s whole body was on fire. Her hands cradled his rock hard erection, moving up and down, teasing, gently twisting its length while Roarke continued to plunder her mouth and tease her nipples.
She smiled against his mouth. Roarke lifted his head and looked at her with lust burning in his eyes.
“I’m thirsty,” she said.
“You want to get a drink, now?”
She laughed softly at his confusion.
Then his mouth curved into a slow grin when she went down on her knees. She heard his sharp and quick breathing as she continued to fist him. She sighed in contentment as her hand moved up and down Roarke’s velvet encased granite shaft.
“Do your worst, my lady,” he rasped, his hands running through her hair.
“My worst, my lord?” She arched her brow. “Oh, my lord, I intend to do my best.”
She gently fisted his glans before she flattened her tongue to lick the underside up to his cock head. Her finger spread his pre-cum over the tip before she licked, flicking her tongue against the tip. His flavour exploded on her taste buds. He was huge. He was salty. And he was delicious. She always had a penchant for anything Roarke.
She kept her eyes on Roarke, enjoying the play of emotions on his face. She continued licking the underside, prolonging his wait. He groaned and held on as she teased the thick vein on the underside of his rod. As she reached the base, she opened her mouth wider and drew his balls into the wet haven of her mouth. Her lips sucked while her tongue laved. Roarke threw his head back, a guttural sound emitting from inside his chest. He looked back down.
“You torment me, my lady.”
She fluttered her lashes and grinned, before she stiffened her tongue. If lust could get any hotter, it was in Roarke’s golden eyes. She’d never felt this kind of power over a man.
It was very humbling.
Roarke’s breathing came in gasps the closer her tongue got to his cock head. Then as though teetering close to the precipice, she slowly raised on her knees, her eyes still on Roarke before she enveloped as much of his entire shaft into her warm mouth as she could.
Roarke groaned loudly in pleasure.
Her heart felt like it was bursting from her chest. Her mouth and tongue revelled at the feel of Roarke’s penis as she pampered him. Up and down. Sucking. Licking. Laving. The feel of his shaft’s skin against her mouth’s inner walls was exquisite. She relaxed her throat to take him as deep as she could. She closed her eyes and hummed.
“Deanna!”
She could feel he was close to the edge. Bobbing her head faster, in concert with her fist pumps, she sought to please Roarke in every way she could, rolling his tightening sac with the other hand, loving the groans coming from deep in his chest. Her forefinger slowly inched underneath the sac and she pressed on his perineum.
“Deanna! Oh, fuck!”
With a guttural shout Roarke erupted inside her mouth.
She closed her eyes as pleasure washed over her. She swallowed his essence, milking him for all he was worth. Her mouth continued moving up and down, even as Roarke buckled in front of her. Even on his knees, her mouth was still on him.
“Deanna.” His voice was strangled as he removed her from his overly sensitive shaft. He lifted her face and gave her a long hard kiss. She moaned against his mouth, letting him taste himself on her tongue. “Now, that’s one sexy way of feeding me.”
“Hhmmmm…” she purred before she sat on her feet. Her arms loosely encircled his neck as he kissed a trail to the sensitive spot behind her ear and down the column of her throat. “You really have to go, Roarke.”
“Deanna.”