You are here: Products Fledgling by Natasha Brown 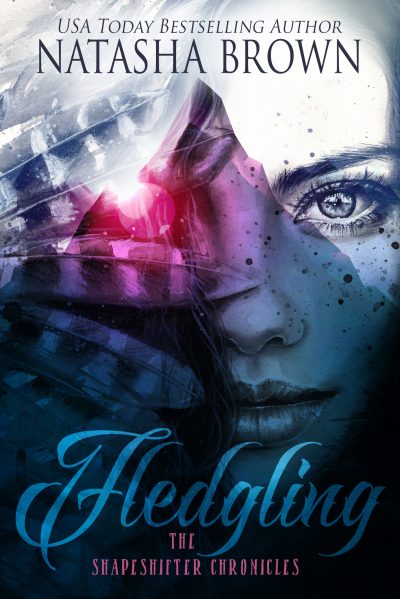 Normal. Wouldn’t that be nice?

Ana Hughes has always wanted to be like any other teenager. But her life-threatening heart condition has always gotten in the way. A fresh start in a new town gives her the opportunity to pretend she’s like everybody else.

When she meets handsome Chance Morgan, she suspects she isn’t the only one keeping a secret. Chance’s animal-like senses and miraculous healing ability make Ana question if he’s playing tricks on her.

The truth may be too much for Ana’s delicate heart. But there could be a greater danger if a supernatural world exists where everything and everyone are not what they seem.

USA Today bestselling author Natasha Brown's imagination has always been a distraction. The books she read in the dark past bedtime fed her excitement for fantasy worlds. Once she started writing, there was no stopping her. By day, Natasha’s an assistant teacher at an elementary school, and by night she’s a book cover designer. Her weekends are spent writing and spending time with family.

My daughter was born with congenital heart defects, which inspired this story.

Sterile white walls surrounded Ana once again. They provided a form of anesthesia, a cocoon that left her comfortably numb. She sat on the examination table, her hands folded on her lap. Even though she was eighteen and technically an adult, she felt like she was six years old again and totally powerless.
“Good thing we don’t pay Dr. Wilson by the hour,” her mother sighed.
Ana glanced over. Melissa was fidgeting with her watch. Permanent worry lines creased her otherwise attractive features, making her appear far older than she was.
Ana gripped the edge of the padded table and shrugged. “Mom, you should know it always takes longer than you expect. Nothing moves quickly here.”
A sharp knock announced Dr. Wilson, a tall man with glasses. “Hello ladies, I’m sorry I’m running late today.”
Ana’s mother jumped up, almost knocking her purse onto the floor and shook the doctor’s hand.
“Nice seeing you again,” Dr. Wilson said. “How are you?”
“I’ve been better.” The strain on Melissa’s face was evident. “I was laid off.”
Dr. Wilson frowned. “I’m sorry to hear. Any hope for a new job?”
Melissa shrugged. “Well, my sister talked to my old boss at Clark Bend Bank, but that’s in Idaho.”
Ana shot her a glare, which she conveniently avoided. Her mother sighed, “Eva won’t be happy about leaving her friends, but she’s resilient. But, I’m not sure about dragging Ana out of state. Is it too risky?”
Dr. Wilson adjusted his glasses. “It couldn’t hurt moving to a lower altitude. More available oxygen could make Ana a bit more comfortable.”
Ana wondered if they’d notice if she stood up and left the room. As if reading her mind, Dr. Wilson turned to face her. “Ana, I didn’t mean to ignore you. How are you feeling?”
She recognized his familiar frown. Why did everyone always have to feel sorry for her? She was sick and tired of it. She wasn’t pitiful like a stray dog. Or was she? Ana stared into his eyes and saw the answer.
“I’m fine.”
“Baby, weren’t you complaining of shortness of breath?” Melissa glanced at her. “I noticed you had problems the other day carrying the laundry upstairs.”
“That’s no different from three weeks ago,” Ana said under her breath.
Dr. Wilson nodded sympathetically and crossed his arms. “I’m going to be honest. I know you don’t want to hear the word transplant, but I’m afraid that’s where we’re headed. Your heart’s hardening more rapidly now, and I’m worried you’re approaching congenital heart failure. At this rate, you may only have a few months.”
Silence fell. With each breath Ana took, she counted away the seconds she would never get back. Each breath closer to surgery or worse.
Dr. Wilson breached the quiet room with his softened voice. “Although moving may be a bit of an adjustment, it could give you more time in the waiting game. When you’re placed on the transplant list, it could be a day or a year. Idaho doesn’t have any transplant centers, but Washington does, and I know the division chief at Seattle Children’s Hospital. Where was it in Idaho you were thinking of moving?”
Melissa cleared her throat and answered, “Clark Bend in northern Idaho. It’s not too far from Seattle.”
“Well, it’s up to you ladies, but I would support the move as long as Ana takes it easy.” He grinned and squeezed Ana’s shoulder. “No carrying heavy boxes or armchairs.”
His wire-rimmed glasses gleamed from the fluorescent lighting, and Ana’s reflection stared back at her blankly. She was having a worst-case scenario kind of day. Then she considered it was more like a worst-case scenario kind of life.
Melissa caught her eye. Worry was written all over her face. Her mother only wanted the best for her, and it had just gone from hard to worse after the layoffs. A job with insurance was necessary. With no family nearby, going through a transplant would be a challenge, to say the least. Melissa needed her sister’s support.
Ana was never at leisure to make decisions based off what she wanted. She was always handcuffed without a choice. Choice would imply there was more than one option, and there never was. Not in her case.
While her doctor told her mother about the state-of-the-art facility in Washington, Ana dropped to the floor and walked to the window. Her long, pale fingers tightened into fists, and she closed her eyes tight. She was tired of the constraints of her body and the never-ending fear that plagued her. She hated her heart. It always ruined everything. Peering from the third-story window down to the cars driving past on the streets below, she wished she could trade places with any anonymous, normal person. Boring would be great. If her biggest problems were cars and boys, she’d be overjoyed.
Normal. Was that too much to ask?