You are here: Products Flawless (A Hostile Beauty Novel, Book 1) by Jan Moran 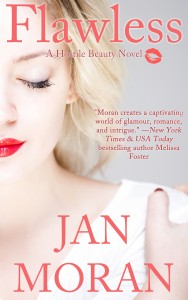 Verena Valent is at the helm of her family’s legendary Swiss skincare company, which caters to a glamorous clientele in the heart of Beverly Hills. After her parents are killed in an automobile accident, she becomes the sole provider for her younger twin sisters and her grandmother. Instead of attending college with her friends as planned, she rises to the challenge. She is in the midst of a critical international expansion into Asia when her carefully organized life begins to unravel.

Verena is shaken to discover that her venture capitalist fiancé, Derrick, might be behind a scheme to take over her growing company. While she struggles to save the business that means everything to her, she meets Lance, an executive chef at the Beverly Hills Hotel. Ultimately, Verena learns that truth, family, friendship, and love are the unshakable pillars of life. But will she get a second chance in business, or in love?

Follow a group of smart, stylish, entrepreneurial friends as they navigate the turbulences of modern life in the business of beauty. The Hostile Beauty series is an engaging series that features gutsy, determined best friends, and how they manage to live the lives of their dreams.

“An engrossing view into the world of ‘beautiful people’ with an ending that will leave you wanting more.” -New York Times and USA Today bestselling author Melissa Foster

Jan Moran writes historical women’s fiction for St. Martin’s Press (Scent of Triumph). As a hybrid author, she also writes contemporary women’s fiction (Flawless, Beauty Mark) and nonfiction (Fabulous Fragrances I & II). Her stories are smart and stylish, and written with emotional depth. Jan has been featured in numerous prestigious media, including CNN, Women’s Wear Daily, Wall Street Journal, Allure, InStyle, O Magazine, Cosmopolitan, Elle, and Costco Connection, and has spoken before prestigious organizations, including The American Society of Perfumers. She is a graduate of Harvard Business School, the University of Texas, and attended the UCLA Writers Program. She lives in San Diego. Find her at www.JanMoran.com.

I’ve been in the beauty business for years as a writer and entrepreneur. The behind-the-scenes stories in the glamorous industries are fascinating, and I wanted to share some of these in this series with readers – all fictional, of course. The friendship between the four women is supportive and encouraging as they strive to live the lives of their dreams. As for the settings, I used to live in Beverly Hills, so the locations are authentic. For the Paris scenes, I used some of my favorite hotels and restaurants that I used to visit when I was travelling on business. This is one of my favorite parts of the book.

Be the first to review “Flawless (A Hostile Beauty Novel, Book 1) by Jan Moran” Cancel reply