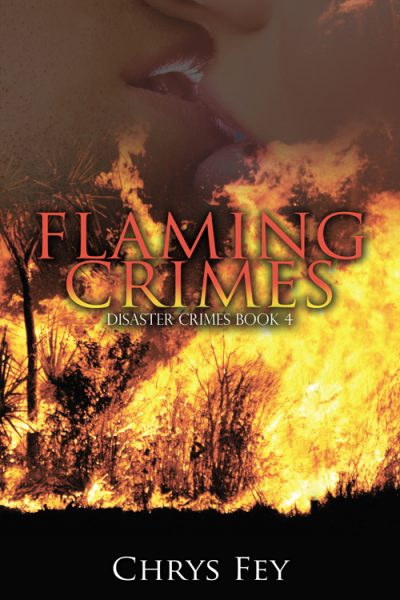 Beth and Donovan are now happily married, and what Beth wants more than anything is a baby. Her dream of starting a family is put on hold as fires burn dangerously close and Donovan becomes a victim of sabotage.

Donovan escapes what could’ve been a deadly wreck. Their past enemies have been eliminated, so who is cutting brake lines and leaving bloody messages? He vows to find out, for the sake of the woman he loves and the life they’re trying to build.

Amidst a criminal mind game, a fire ignites next to their home. They battle the flames and fight to keep their house safe from the blaze pressing in on all sides, but neither of them expects to confront a psychotic adversary in the middle of the inferno.

Their lives may just go up in flames…

Chrys Fey is the author of the Disaster Crimes Series, a unique concept blending romance, crimes, and disasters. She’s an administrator for the Insecure Writer’s Support Group, running their newsletter and book club. She’s also an editor for Dancing Lemur Press.</p>
<p>Fey realized she wanted to write by watching her mother pursue publication. At the age of twelve, she started her first novel, which flourished into a series she later rewrote at seventeen.</p>
<p>Fey lives in Florida and is always on the lookout for hurricanes. She has four cats and three nephews, both keep her entertained with their antics.

Many scenes, and the idea to have fire as the next disaster in my series, came from my real life. I was only nine when a fire nearly took my childhood home.</p>
<p>My best friend and I waited for her dad to pick us up from school. I could smell a hint of smoke in the air, but I couldn’t see anything. It wasn’t until I was seated in the backseat of my best friend’s dad’s car and we turned away from the school, toward home, when a smoke plume became visible. It was stretching above the trees, reaching higher into the sky. The color went from light to dark gray. While staring at it, my mouth went dry, my palms became slick with sweat, and it felt as though my heart sank down to my gallbladder. For a reason I could not explain, that smoke plume terrified me. </p>
<p>We all looked at it. And then my best friend’s dad said something to me I’ll never forget, “It looks like it’s right next to your house.”</p>
<p>The seed of panic that had cropped up at the sight of that smoke grew to full-blown panic. My heart raced. The closer we got, the larger the smoke plume became. </p>
<p>When we turned into my neighborhood, that smokestack was right in front of us, expanding and growing darker.</p>
<p>My best friend’s dad stopped the car at the end of my road to talk to someone, and my panic exploded into a trillion pieces. Looking down the street, I saw fire feasting on the trees next to my house.</p>
<p>It. Was. Right. There.

Beth’s heart clenched at the sight of the smoke stacks, as if a fist had driven through her chest and was squeezing the meaty human drum, paralyzing it. She gripped the door handle. The faster Donovan drove and the closer they got to home, to those tiers of billowing, dark smoke, the more anxious she became. Donovan’s words replayed in her head.</p>
<p>It looks like it’s right next to our house.</p>
<p>Her heart woke from its coma and punched her ribcage like a boxer attacking a speed bag. Perspiration dampened her underarms and slicked her palms. Please, God, no. I can’t lose my home again.</p>
<p>The smoke stack was soon right in front of them, right where their home was located. Donovan turned down their street, and the tower of smoke loomed above them. Fire consumed the empty lot next to their house. Flames ate their way up the bark spines of pine trees. Orange flickers slithered along the length of the branches, reaching toward the roof. The fire was descending upon their forever home as a raiding army would race toward a city with swords drawn.</p>
<p>Donovan floored it down the street and brought the truck to a jerking stop in the driveway. He jumped out of the truck without taking the key out of the ignition. Beth<br />
shoved the door open and stumbled out onto the driveway.</p>
<p>“Call the fire department, pack some clothes. I’m getting the hose.” Donovan raced toward the fire and slipped around the side of the house.