You are here: Products First Love by Denise Daniella Darcy 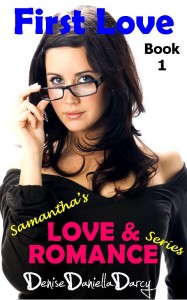 FIRST LOVE is Book 1 in the new Samantha’s Love & Romance Series, by Denise Daniella Darcy, or Triple D as she is affectionately called.

Samantha Morgan: Shy, inexperienced and lonely, but hot and sexy behind the tied up hair, glasses, and non-flattering clothes. Too bad she just doesn’t know it. Sam is the junior partner in her uncle’s advertising firm.

Aiden Williams: Tall, strong and sexy, soon has Samantha in cuffs and on her way to jail. Can he really be Sam’s prince charming?

Uncle Tyrone: A bad influence if there wasn’t a core of genuine niceness under his roguish behavior.

Can shy Samantha come out of her shell long enough and deal with her conflicting emotions to find love and romance? And if she does, is there such a thing as true love in today’s hectic and complicated world?

” “It is hard to find a good romance story that isn’t just straight sex without a plot. Well, Denise Daniella Darcy writes a great story, one that is of the ‘I can’t put it down until I’m finished’ kind. Great story!” — S. Pontleroy, Tacoma, WA

” “Exciting, interesting, and best of all I could really feel the emotions that Samantha was experiencing. …Love and romance at its best.” — N. Andrews, San Juan, Puerto Rico

” “I’m a cautious buyer. (My friends call me Ms. Cheapo.) But I love a bargain. I found a good one in Denise Daniella Darcy’s latest Romance series. First, I should say that the novel, First Love, is a good story on its own. Solid characters, interesting locations, and a good plot that actually tells a story… Absolutely 5 stars.” — C. Swinton, Tampa, FL

Like multiple endings? ‘Triple D’ has a SPECIAL TREAT for her readers. Each story in this series has 2 additional totally unique and different endings that dramatically change the outcome. And the best part- they are absolutely FREE for her readers.

Triple D writes stimulating contemporary romances with passion, humor and a down to earth feel that resonates with her readers. Written for readers of young adult, new adult, and teen romance. She writes with a similar style to Catherine Bybee, Debbie Macomber and Melody Anne.

Don’t miss any of the books in Samantha’s Love & Romance Series:

And don’t miss any of the books in Alexandra’s Love & Romance Series:

And I know she’d love you to visit her at www.DeniseDaniellaDarcy.com.

Denise Daniella Darcy, or Triple D as she is affectionately called by family, friends and fans, started life as a mortician’s helper. Faced with the daily task of making the dead appear happy, she decided to switch careers and apply her talents to making the living happy instead. She achieves that through her Love & Romance novels. She writes from the heart, with a viewpoint that to grow you need to push your boundaries, and you find happiness wherever it may appear and in any shape that it comes.