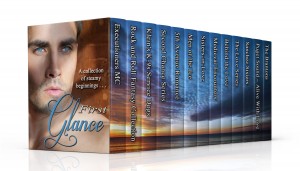 Love your romance with variety? Love the joy of knowing you’re finding a brand new series with more fab books to follow?

FIRST GLANCE gives you THIRTEEN, very different, exciting series for you to fall in love with! There’s something for every taste in these THIRTEEN romances from USA Today and Amazon bestselling authors. From light paranormal, to Motorcycle Club romantic suspense, to New Adult, reunited first loves and sports and even a taste of forbidden love. First Glance has it all: sexy heroes and smart heroines in love stories to make you cheer, sigh, and beg for more.

Bonnie Edwards is a multi-published author who lives with her husband and pets on the rainy coast of British Columbia. She believes life should be lived with joy. That joy shows up in her earthy, irreverent love stories. Bonnie uses long hikes to bounce ideas off her husband and her standard poodle, who almost always agrees with her. She has written novels, novellas and short stories for Carina Press, Harlequin, Kensington Books, and Robinson (UK) although now she publishes her work herself. Sometimes her stories have a paranormal twist, likes curses and ghosts, other times not. But they’re always entertaining and guarantee a happy ending.

We put together this box set to give readers a “first glance” at the first book in our individual box sets. The set is inspired by a love of romance and writing books that will keep readers coming back for more.