You are here: Products First (99 Daddies. Book 1) by Casey Cox 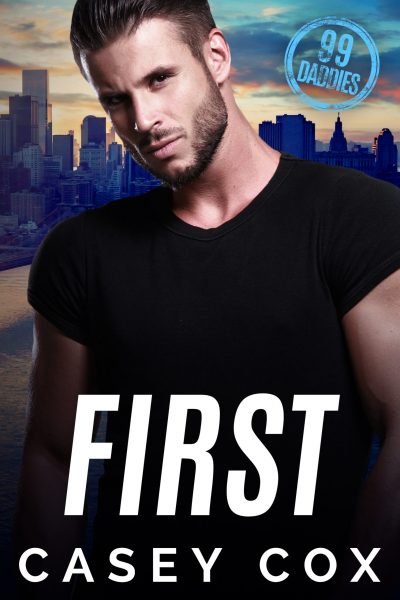 A boy who can’t find what he wants.
A Daddy who doesn’t know what he needs.

With his big blue eyes, lean frame, and propensity for adorkable clumsiness, Mikey Harrison is a Daddy magnet…for the wrong type of Daddy. Those who mistake his desire to serve as an open invitation to mistreat him and abuse his trust.

But all of that changes when he lays his eyes on Stirling Bishop. Sure, the strong, silent (and irresistibly sexy) type ticks all of his boxes, but it’s the tenderness underlying Stirling’s strength that makes him achingly irresistible.

Despite looking like he was put on this earth to be the Daddy of every boy’s dreams, the thought of dating a younger guy has never even crossed Stirling’s mind, much less the idea of being a Daddy.

But there’s no denying that Mikey awakens something deep within him—the desire to dominate, the need to care. It’s been dormant, yet bubbling under the surface within him for his entire life.

Can Mikey help Stirling find the strength he needs to be the Daddy he was meant to be…and become the Daddy of Mikey’s dreams?

*** First is a Daddy-lite gay romance featuring a strong, silent, first-time Daddy, and an eager boy who can show him the way. Come along for the ride and enjoy some crazy/sexy/cool shenanigans including: impromptu foot rubs, naked butlers, a crew of sassy friends, lots of LOLs, and all the feels on the way to a heartwarming HEA.

Casey Cox is devoted to delighting readers with sassy, sweet and sometimes steamy MM gay romance tales of gorgeous, good-hearted and complex men chasing that thing we all love: a guaranteed HEA.

Casey's writing has an escapist, wanderlust quality to it because, let's face it, these days there are plenty of reasons to run from reality.

Casey lives on the east coast of Australia, loves the beach and is a proud fur-parent to two utterly adorable, perfectly-perfect French Bulldogs named Ralphie and Lilly.

You would think that a week would be a decent enough amount of time to get someone who you’d barely met, someone who had used you as a piece of human furniture no less, out of your head.

I didn’t know why, but I just couldn’t get Stirling out of my head.

The last time I’d seen him had been that night, after everyone had sung happy birthday to Steel. I’d seen someone hand him a piece of cake, and then that was it. He’d disappeared. He had looked tired, and I had caught him yawning, so it made sense that he had left the party early to go home.

Even though I knew it shouldn’t, it did hurt a little that he hadn’t come to say goodbye. Okay, maybe more than just a little. I couldn’t help it. He hadn’t come back over to see me or even just wave a quick goodbye. That was all I needed, to have seen him just one more time.

But then again, why would he have come over? We had only just met and it wasn’t like we were being introduced to each other through friends at a party. I came into his life as a human footstool. And by the looks of things, I wasn’t going to be anything more to him. So why would he have bothered to find me to say goodbye?

I had definitely felt something toward him, but in all honesty, apart from my own desperate desire for it, I hadn’t had any indication that he felt anything toward me. Sure, maybe he’d looked at me a little longer than usual, maybe he’d looked like he was about to say something before Steel took him away…but that was all it was, a whole bunch of maybes.

I was doing that thing that I always did, running ahead of myself. Reality never caught up to the fantasy I created in my head, a fantasy where a guy like that, a dreamboat Daddy, would be interested in, and compatible with, a boy like me.

But this time though, it really did feel different.

Be the first to review “First (99 Daddies. Book 1) by Casey Cox” Cancel reply