You are here: Products Firebird by Jennifer Loring 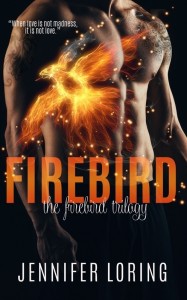 Stephanie Hartwell is a journalist chasing the story of her career…

When superstar hockey player and notorious bad boy Aleksandr Volynsky is traded to the Seattle Earthquakes in a blockbuster deal, Stephanie demands the opportunity to prove herself by scoring an exclusive interview with a man with no love for the media…the same man she once thought, as a naïve teenager, she’d someday marry.

An Olympian and Stanley Cup Champion, Aleksandr has achieved every goal he’s ever set…

Now expected to carry a failing team on his shoulders, Aleksandr’s troubles deepen when he encounters Stephanie after a season-opening loss. His lifestyle of drinking and random hookups has been a futile attempt to forget the beautiful tomboy who stole his heart nine years ago. And worse, fame and fortune have made it impossible for him to trust anyone—especially Stephanie, who is engaged to another man.

Being with Aleksandr in the first place jeopardizes Stephanie’s journalistic integrity and threatens her career, and when he spirals out of control, it reawakens fears from her own history, making her unable to commit to a future with him.

When Aleksandr discovers the truth behind his self-destructive behavior, will his newfound self-awareness be enough to convince Stephanie to give him one last chance…

Or will his revelation drive her away for good?

Jennifer Loring’s short fiction has appeared in numerous magazines, webzines, and anthologies. In 2013, she won Crystal Lake Publishing’s inaugural Tales from the Lake writing competition; in 2014, DarkFuse published her novella Conduits, and in May 2015, Omnium Gatherum released her debut novel, Those of My Kind. She recently signed a deal for a contemporary romance trilogy with Limitless Publishing; the first book, Firebird, is due out on October 20, 2015. Jennifer lives in Philadelphia, PA with her husband, their turtle, and two basset hounds. She is currently at work on the second book in the Firebird Trilogy as well as a paranormal romance.

The original idea actually came to me in a dream, which I jotted down in case I ever decided to write a romance novel (I usually write horror and dark fantasy). I’m a huge hockey fan, and I couldn’t get the dream or the characters’ relationship out of my head. I was also ready to branch into new genres, so this was the perfect opportunity. I wrote the first draft as my 2014 NaNoWriMo project.

Stephanie Hartwell marched into her editor-in-chief’s office, flung the door shut, and slammed her stained coffee mug on his desk.
“No. Give me that story, Dave. Those assholes out there have had the chance to prove themselves. A million chances. I didn’t go to USC to write theater reviews.”
Dave failed to suppress a smile. “Nothing personal, Steph. The Volynsky trade is a big deal, and I need someone familiar with Seattle sports to cover it.”
The veins in her neck throbbed, and a flush burned her face. She’d never been good at controlling her emotions, especially anger. Especially when he was underestimating her because she had tits. “I’ve been here three years. You want ’familiar’? Volynsky has played all eighty-two games for the past four seasons. Eighty points or higher in each of those seasons. Leads the league in shots on goal and is top ten in assists. He’s a plus-three, plays at least twenty-one minutes a game, and averages forty-eight goals per season. Shall I go on?”
Dave’s eyebrows inched toward his receding hairline.
“You know what they call me behind my back, Dave? ‘Puck bunny.’ I played hockey most of my life. I know the game. You show me a puck bunny that does.” She stabbed her finger at him. “Give me the story.”
“All right, all right, Jesus.” Dave waved his palms at her like two white flags. He clacked out what she presumed was a follow-up email relieving Shawn of his Volynsky duties. Stephanie tensed in a preemptive, involuntary defensive posture for the verbal assault she expected as soon as she left Dave’s office.
“How do you know all this, anyway?”
“Would you ask any of the guys that?”
“Not everything is an attack on you, Steph. I’m on your side. I know you feel like you have to be better than everyone just to be considered average.”
Stephanie let her shoulders sink and her fingers uncurl. The muscles in her neck ached. She expelled a long breath and shifted her gaze to the view of Puget Sound out the window. The past had compromised her objectivity, but it would not compromise her job.
“Steph? You still with me?”
“Yeah. Sorry. Just thinking of the right lead.”
“That’s why you’re the best. Okay, the season opener is tomorrow night. You’re on it. Get him to agree to an exclusive story. I’ll see what I can do on my end. Rumor has it he’s difficult.”
She’d heard all the stories. Everyone had. The hard-drinking, womanizing bad boy. A modern-day Derek Sanderson and stereotypical star athlete, whose behavior fed rising public disgust with pro-sports salaries and Seattle’s own taxpayer-funded, three hundred fifty million-dollar Amazon Arena. The Seattle Earthquakes had struggled from day one two years ago in a market with an inexplicable lack of hockey fans, fewer than even Arizona or Florida. Giving away the farm for Volynsky—eight years, ninety-two million dollars, and two top prospects—volatile as he was, became a last-ditch effort to avoid the fates of the Predators, Coyotes, and Panthers, all relocated to Canada.
“I deal with bullshit from entitled man-children every day. I can handle him.” She’d done it before. In another life, when he’d been someone else.
Dave chuckled and shook his head. “I almost feel sorry for him. Now go. Do me proud.”
“You got it.” Stephanie plucked her mug from his desk and left the office. Her spine stiffened when she saw Shawn glaring at her over the long table, lined with computers on either side, at which the staff worked. She’d have no privacy unless she earned her coveted promotion and an office.
“We all know why you wanted that story.” His gaze landed on her chest, which wasn’t large, and she crossed her arms. The mug dangled from her fingertips. She stifled the urge to smash it over his head. But that would be all the ammo he’d need to prove he’d been right all along—that she was too irrational, too emotional, to handle the job.
Too female.
“Oh? Do tell me, Shawn. I mean, we’ve had so many deep, meaningful conversations. It couldn’t possibly be because I played hockey from age five until I graduated from college and still play adult league.” She lifted her chin and drilled her stare into him, hoping his head would explode Scanners style. “Why don’t you spend less time worrying about me and more time figuring out why you’re such a whiny, self-absorbed, spoiled little shit?”
A chorus of chuckles and “oohs” rose from the table. Shawn’s jaw muscles tightened, and his eyes were like an overcast day on the lake, reflecting her hatred back at her.
“Bitch,” he muttered as she walked away. With her back to him, she pretended to let the word roll off her like a raindrop, unimportant and unworthy of her attention. She slid into her chair, furious when tears pricked her eyes. She distracted herself with the mail left beside her monitor during her meeting. The latest People, their “One Hundred Most Beautiful” issue. Mindless eye candy. Just what she needed. She opened the magazine and skimmed the list.
Her heart stopped, skipped, restarted.
Number ninety-eight.
Aleksandr Volynsky: With his GQ looks and killer body, this twenty-five-year-old power forward has been setting the NHL on fire for seven seasons already. The six-foot-five Russian stud, as notorious for his off-ice antics as for his puck-handling skills, is surprisingly coy about his love life. “There is someone, yes,” he says. “We’re just not in the same place right now.”
He was naked from the waist up and clad in his hockey gear from the waist down, holding his stick in his right hand. They’d Photoshopped the scar on his right cheek, where four years ago an errant puck had split his face open, broken his jaw, and shattered several of his teeth.
God, he was beautiful.

Be the first to review “Firebird by Jennifer Loring” Cancel reply