You are here: Products Fire On The Moon by Rebecca York 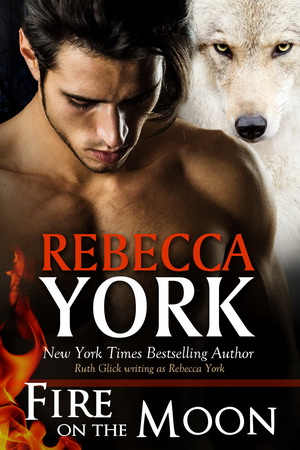 Fire On The Moon by Rebecca York

When Francesca Turner visits her estranged uncle’s estate in Florida, she doesn’t know she’s stepping into a death trap. Only the cunning strategies of werewolf Zane Marshall can save her. But as the two of them are hunted down, they must fight for survival and the happily ever after they both desire.

A New York Times, USA Today, and Publishers Weekly best-selling and award-winning author, Rebecca has written over 145 books and novellas. In 2011 she became the dozenth author to receive the Romance Writers of America Centennial Award for having written 100 romantic novels. Her Killing Moon was a launch title for Berkley’s Sensation imprint in June 2003. Five more books in the series have followed.

Rebecca has authored or co-authored over 65 romantic thrillers, many for Harlequin Intrigue’s very popular 43 Light Street series, set in Baltimore, and many with paranormal elements.

s Uncle Angelo turned to see what had caught her attention, he made a strangled sound.

“Come on. Quick.” He turned and took her arm.

Dragging her up, he propelled her toward the house. Inside, he headed back to the front hall and opened the double doors to the coat closet. He swept the hanging clothing aside and pressed the edge of the back wall. A door slid open, and he shoved her into a dark, closed space. “Don’t make a sound if you don’t wanna get dragged into this.”

Quickly he closed the door, and his footsteps receded.

It had all happened so fast that she hardly had time to absorb his words. But as the implications slammed into her, she started to shake.

Voices drifted toward her from the back of the house.

She heard something that sounded like a fist slamming into flesh, and someone made a gagging sound. She had to assume one of the men had hit her uncle.

God, if she could only call 911 and ask for help from the police. But her phone was in her purse, and it was still on the table on the veranda.

Oh no. Her uncle had shoved her into this hidden space at the back of the closet, but the men had surely seen her pocketbook and knew she was here.

One of the men was speaking again. “You think you can go up against the boss?”

“I’m not.” Her uncle answered, his voice sounding high and thin.

“What would you call it?”

There was a pause in the threatening conversation, and she held her breath, waiting for what might come next.

Not more words, only another cry of pain.

She hardly knew her uncle, but it was torture standing here in the dark listening to him being hurt. And there was nothing she could do. If she went out there, they’d just beat her up, too. Or maybe they’d kill a witness.

Could she get out of the closet and make it to the street? She wasn’t even sure how the hidden door worked, and if she tried to open it, the noise might give her away.

“You got one more chance.” The murderous voice threatened from the back of the house.

There was a long pause. It was followed by two little popping sounds that might have been firecrackers. Under the circumstances she was pretty sure they had come from a handgun.