You are here: Products Fire & Ice by Megan Roma 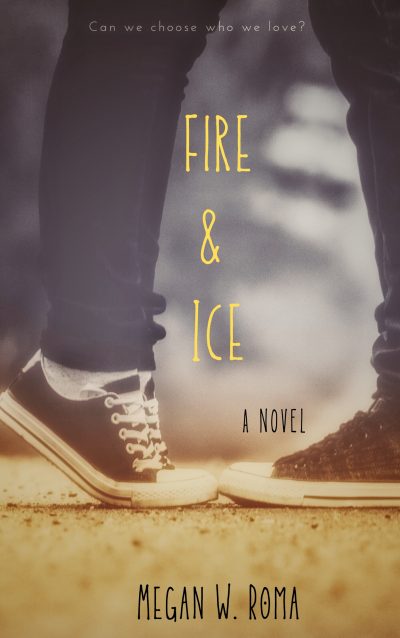 Skye Larson has her pick of the guys her age. But after a wreck caused by her latest ex, she swears off men as a lost cause. Until Dorran Black, the handsome hunk of a mechanic, is hired to restore her beloved BMW. Dorran looks obnoxiously like her last boyfriend, but he is like ice: cold and unyielding. And soon he will leave town forever. But after she falls head-over-heels for him, can she melt Dorran’s heart before it’s too late?

Skye just managed to avoid another eye roll as she looked at the unimpressive garage in front of them: two-story, beige and brown, with white trim. Four garage bays took up the bottom floor, with two doors presently open. The second story looked like someone’s apartment, with a huge square window front and center.
“I’m trusting my baby to this dump?” she fumed, snatching an envelope from her purse. “Well, let’s get this over with.”
The husky tow driver hopped out of her truck and met a short man who emerged from the shop. He stood stocky, with a nicely trimmed black beard and a dark blue jump suit bearing the name Max. As the two shook hands, Skye limped up to Max and handed him the envelope.
“This is from my dad,” she said. She pointed hopefully to her dead M3. “Can you fix it?”
Max scanned the letter and nodded in acknowledgement. As the driver released the crushed M3 and drove away, Max’s eyes grew large. He walked around the car with the speed of a half-dead turtle. His face appeared far more serious and much less optimistic than Skye would have hoped.
“Let me get our expert,” he said quietly. “Be right back.” He disappeared into one of the open bay doors.
“That doesn’t sound good,” Sage said quietly. “Isn’t he Max, of Max’s Auto Body Shop?”
“Shh-h-h, he’ll hear you,” Skye murmured. “If he says he has an expert, all the better.”
A moment later Skye’s world seemed to stop, and not in a good way. Following Max was a guy who looked around her age. About 6’ 2”, handsome as a movie star and ripped—his muscles bulged through his shirt. This added to his black hair and square jawline amounted to someone who seemed uncomfortably familiar.
“Is that…Darrell?” Sage whispered a second before Skye did.
“Maybe his twin?” Skye guessed.
It was uncanny, but no, Skye told herself. Darrell—who was strung up in the hospital ward with two broken arms, two broken legs, four cracked ribs and a full-blown concussion, had no siblings. And this beefcake in front of her wore a snake tattoo down his well-muscled right arm. Darrell always dissed guys with skin markings or piercings of any kind.
The hunk walked confidently over to the wrecked M3 and examined it inside and out, without introducing himself to Skye. He studied the crumpled body, the smashed-out windows, and damaged seats.
“This is Dorran, our auto body specialist,” Max said, as the young man knelt and ran his hands carefully over the side fenders, the hood, and doors.
“What…happened?” Dorran murmured, loud enough for Skye to hear. He grimaced and whistled as he looked under the car and finally, the roof before siding back up to Max. “The thing is beyond totaled,” he said, matter of fact. “End of story.”
Skye glared at him, ticked at being ignored. “Hello? Over here? You know? Car owner?”
Dorran’s eyes quickly took in Skye’s face, her arm in a sling, and finally her boot. His face softened.
“You’re lucky to be alive!” he said with a slight smile. His voice was low, masculine. Sexy. But his words, along with his annoying resemblance to her ex-boyfriend, set her off.
“Oh, really?” she snapped. “Would that be your expert opinion? Just tell me if you can fix the car!”
Dorran’s expression turned a 180. “Surprise me, please. Say something intelligent,” he said. “That is anyone’s expert opinion when you look at that. Your insurance won’t cover the damages to repair. It would be cheaper to buy something else. A lot cheaper.”
Skye eyed the mechanic, impressed by his ability to fight back. Darrell would have just collapsed like a wet noddle. But she wasn’t going to give up.
“I don’t want another car!” she retorted, her right arm suddenly flaring with pain. “Are you really a skilled mechanic or just a moron trying to impress?”
“Not too many people like you, do they?” Dorran shot back smoothly, as if he’d practiced that line before. He looked at her with an upraised eyebrow.