You are here: Products Final Hours (Love in Time Book One) by Cate Dean 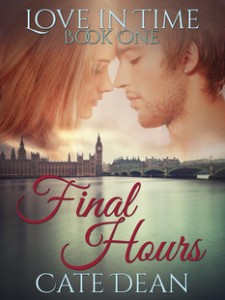 Final Hours (Love in Time Book One) by Cate Dean

Time brought them together – will it also tear them apart?

Elizabeth Barritt fought hard to put her childhood behind her. Now she has the chance to move forward, to reach out for a new future.

And she does – right into Jackson Kane’s path. He is a time traveler, from the future, and on the hunt for a rogue agent.

Their attraction is immediate, unexpected – and for Kane, an unwanted distraction. When he is injured protecting Elizabeth, she makes a decision that will change both of their lives. She takes him home.

Once Kane is healed, he goes after the agent. But his journey back to war-torn London takes a sideways turn, forcing Elizabeth to make another choice. She follows him into the past, to help him stop one man from changing their future.

I look forward to meeting you. 🙂

I wove that into the story, and enjoyed writing a fictional story around a very real event.

Elizabeth knew, when she saw his eyes change, just what he had planned as he stalked back across the lab.
She couldn’t move, could hardly breathe.
When he swept her up and his lips possessed hers, she expected a hot, fierce, angry kiss. Instead, his lips gentled, exploring hers. The effect was devastating.
He broke through every barrier she’d spent years building, and she felt her heart open to him, trembling, vulnerable.
Both arms reached up to wrap around his neck, and her fingers slid into his thick, unruly hair. He tasted like mint. She let out a low moan when he eased her mouth open, deepening the kiss. She forgot their audience, forgot her fear of becoming attached to a man who would leave her alone, forgot everything but the feel of his lips, the strength of his arms, the heat of his body.
His hand slipped up her back, tangled in her hair as he angled her head, pulled her in deeper. Heat spiraled through her, and the need to get closer had her arching in to him.
She could feel his rapid heartbeat, hear his ragged breath as he started to lose control. Or was that her breath, so fast and hard it made her lightheaded?
Kane broke off the kiss, staring down at her.
“God help me,” he whispered, just before he dove in again.
This time it was fierce and hungry, and she rode the wild emotions, abandoning any attempt to hold back. His demanding mouth, the hands curving over her hips and pressing her tight against him refused to let her retreat.
She lost herself in the heat, in the need for another person she had never felt before. A need she protected herself from, in a life that had no guarantees, and more disappointment than she thought she could ever take and stay whole—
This time she broke off the kiss, fighting to catch her breath, terrified that it was too late. Kane rested his forehead against hers, his own breathing just as labored. “I simply meant to say goodbye.”
“That was some goodbye,” she whispered.
“Too much?” Humor edged his deep voice.
“Unforgettable.”
With a quiet sigh, he pressed his lips to her temple. “Ready for this?”
“No.”
His laughter soothed her nerves. “I need you to ease your death grip on my neck, love.”
The endearment had her tensing again. Oh, yes—it was too late. She liked him before they landed in his time. Now she wanted him. How the hell was she supposed to forget the way his lips felt on hers, the raw, uncontrollable emotion he stirred in her?
She lowered her arms, and Kane eased her to the floor. Heat rushed across her face as everyone in the lab applauded.
To her surprise, Kane bowed, flashing a smile. “Thank you, for your good wishes.” He took her hand, nodded to Mac, and led her to the steps next to the platform. Sparks danced around the perimeter of the circle. “Now I will give you a proper goodbye.” Her heart jumped as he leaned in, but his lips touched her cheek, warm and brief. “Take care, Elizabeth Barritt. Be proud of who you are, live your life for you.”
How could saying goodbye to someone she barely knew hurt so much? Tears stung her eyes at his quiet words. He made it worse by brushing hair off her forehead, his touch gentle, almost more intimate than kissing her.
“Please be careful,” she whispered. Her voice threatened to lodge in her throat, along with her tears. She laid her hand on his left wrist. “Guy is going to do whatever he needs to do to stop you.”
“The constant twinges will be a good reminder. Not a word, Beth.” His fingers cupped her chin. “I will be ready for him. Now, I believe I need to kiss you again. For luck,” he said against her lips, just before he claimed them.
This time the kiss was achingly sweet, and far too short. Kane ended it, tracing the line of her cheek before he backed out of reach.