You are here: Products Final Eclipse by McKayla Jo Schutt 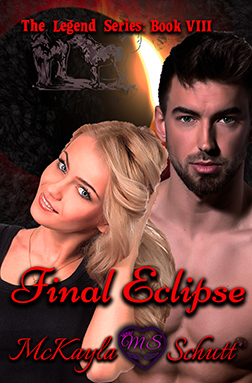 The final book of the Legend Series is here!

Falling in love with a werewolf is breaking the rules of Samara’s job but she can’t stop fate when she imprints with Devin. Samara has been raised to do one thing, find werewolves for the Devil Hunters. She carries gigantic secrets everywhere she goes and now they are about to explode in her face. His green eyes call to her along with the rest of his gorgeous body. Lying to her parents makes it all more problematic as she’s stuck between two worlds about to battle for their lives.

Devin wants his luck to change and imprinting would bring him the missing piece in his life. Yet finding his mate hasn’t been easy since he has both a wolf and witch side. Meeting Samara is meant to be a good thing, a change out of his rut but she’s holding back secrets. As her mysteries come out, he’s faced with a choice. Run away with her and leave his family, pack, and coven. Or convince everyone he loves Samara isn’t their enemy.

The planetary alignment is on the verge of a magical edge heightening witch powers to new levels and the wolves are on edge. With the human and magical side fighting to keep Devin and Samara apart, there is more at stake than just a newly mated couple.

McKayla loves to write books about sexy werewolves. She is a stay at home mom of two in the state of Wyoming. Born in California, she misses the hot weather all of the time. Her goal- to write as many sexy books as possible. However, being a mom of two little ones can take time but she is pushing to finish her work to get more books out for her lovely fans.

Ever since she was little she wanted to be a writer but doubters said that it would be impossible to make money at it. She is pushing herself hard to show them they are wrong.

This is the last book in the Legend Series. But what started the series was walking with my son. A Red Eclipse was happening one night and when I walked by my hospital a character practically demanded to get her story out. Final Eclipse is the ninth book but the romance story line stands alone, but it's way better to read them in order.
As for Samara, the main female lead, she has a complicated past and I wanted to explore what it might be like for a hunter to fall in love with a wolf.

“Oh, I want a mate and I don’t want to fuck it up like my siblings.” He chuckled like he had an inside joke with himself.
“How could you fuck up an imprint?” This piqued her interest for sure.
“Maria had no clue how to complete the bond when she first met Derrick. And my brother didn’t even know he imprinted with his mate till an hour later. To his defense he had been changed earlier that day.” Devin bounced his head from side to side the shrugged.
“I see. You complete the bond by sex or mating and the imprint is like a zap of electricity, right?” Samara wanted to kick herself for letting the information out of her mouth. Every hunter went through an orientation of sorts to know everything they could about werewolves. The whole know your enemy bullshit.
“How on earth do you…wait do you have a wolf in you?” He raised an eyebrow and his eyes studied her. A man slammed his coffee cup down and yelled for the waiter, making Devin lose focus.
“Nope. I’m pretty sure the alpha would’ve said something. Wait, can’t you scent these things since you’re a wolf?” She pushed her food away. Never had she met a wolf-witch and she was intrigued to see if Devin had a witch side like his niece. If all else failed on finding out where the alpha stayed, she could give her parents insight on the new enemy. *Then all of this shit will be out of my hands as I live my life free of them.*
“No, all the heightened senses shit doesn’t come through for me. Only when I shift can I pick up the extra stuff. Kinda sucks but I have other ways at my disposal.” A smirk crossed his lips and Samara wondered what thoughts ran through his mind. A glint of silver shinned in her eyes reminding Samara of her job.
“I see. Well I should probably get back.” Part of her liked Devin already. Even if he had two supernatural sides to him. Ideas of giving her parents a false trail to another city before laying low with Devin flitted through her mind but she tried to push them away.
“Right.” He waved the server over and she smiled right at Devin, not even bothering to look at Samara.
“Did the $200 cover everything?”
“Oh, it’s covered everything sugar.” She winked and walked away with way too much sway in her step. A sudden rage filled Samara’s body. The woman was obviously hitting on Devin. *No, you’re not becoming jealous!*
Samara stood and rushed out before she found the server and punched her in the face. She couldn’t explain the sudden anger or where it had even come from. When she reached his truck, part of her could feel him standing behind her. His hand rubbed her shoulder and a sudden jolt ran under her skin. Her eyes widened as she turned around. *Fuck! Shit! This can’t be happening!*
Before she said a damn word, his hot lips were on her mouth. *Oh, heaven above he tastes so freaking good. Crap what am I doing?*
Samara pushed him away and met his heated gaze. Her head and her brain warred against each other.