You are here: Products Fighting for Love by Mel Curtis 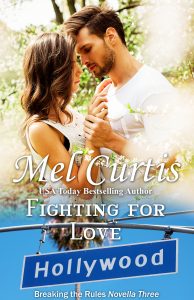 Fighting for Love by Mel Curtis

Mr. Curtis has been a fan of cage fighting since they first began televising fights about a decade ago. When those fights come on, I leave the room. But then women began fighting, and I couldn’t leave the room. It’s oddly hypnotic to watch women step into the octagon and duke it out. I cringe. I gasp. And then I wonder what would drive someone to do this. And as a writer, I often find that is a kernel for a story. Fighting for Love has been percolating in my head for several years. However, I didn’t want to write just a one-off or write a series of “fight” books, so I gave it a loose tie to my Breaking the Rules series (a loose tie that will later be double-knotted). The underground fight scene exists, but is not as common as it was in early years of the sport. Fight organizers and veteran warriors of the octagon want fighters to be paid what they are worth and have medical coverage in case of injury.

There was darkness and quiet, and a sense of deep peace.
Until a scream cut through the cold mountain air.
All the girls in Cabin Two at sixth grade camp startled awake, squealing with false fearfulness.
Becky, their high school counselor, stood and shushed them. “It’s probably a firecracker or something stupid the boys did.” She turned on the light and walked toward the front door of the cabin, wearing only her boyfriend’s white football jersey, boy shorts and naiveté.
Emerald Jones slid off the top bunk and sat on her twin sister Diamond’s bunk. They exchanged glances. Their policeman father had been killed four years earlier in a gang bust gone bad. Dad had taught them judo and self defense. And he’d taught them to assess a situation before stepping into something they didn’t completely understand. He’d also taught their mother, who was in a cabin with the other adult chaperones down the hill.
Without a word, Diamond began putting on her shoes and jacket. As usual, Emerald followed her lead. The two girls moved to the back of the cabin, signaling for their friends to do the same.
And then the gunshots came in rapid fire, and screams filled the air. Diamond shouted at the other girls to run.
A door opened and fluorescent light spilled around a broad shouldered silhouette. “E.R., you ready?”
Emerald Jones sat up, heart pounding, disoriented. She wasn’t twelve. She wasn’t in a cabin. A gunman wasn’t stalking her.
She was twenty six. She sat on industrial carpet in an empty office in a Los Angeles high rise. She wasn’t Emerald Jones anymore. Emerald Jones had died fourteen years ago, or rather she and her twin had taken on new identities after the killings at sixth grade camp. Emerald only existed in E.R. Jones pre-fight prep. And E.R. Jones only existed in the underground fighting world Esme Hoyt competed in.
“E.R.?” The fight staffer’s annoyance didn’t faze her. He was no one.
Esme checked her cell phone. She hadn’t relived the last part of the attack. She hadn’t replayed the image of her mother’s bullet-ridden body crumpling to the ground. She hadn’t felt the subsequent anger pulse through her veins, demanding retribution from the world, demanding she regain control of her life now, in this moment, with her feet and her fists and her wits.
“I’ll be out in five minutes. Don’t interrupt me again.” Esme lay back down and waited until the staffer closed the door, waited until the pulsing beat of dance music several stories beneath her matched the pounding beat of her heart, waited until the darkness outside reflected the darkness within.
She was no longer that helpless girl who ran from a classmate wielding a gun. She was no longer the innocent pre-teen who thought the world was full of hearts and rainbows. She was the woman who’d survived, who would survive again.
She was ready to step into the ring.