You are here: Products Fighting Back: Hell;s Minions MC Book 1 by Shay Michaelson 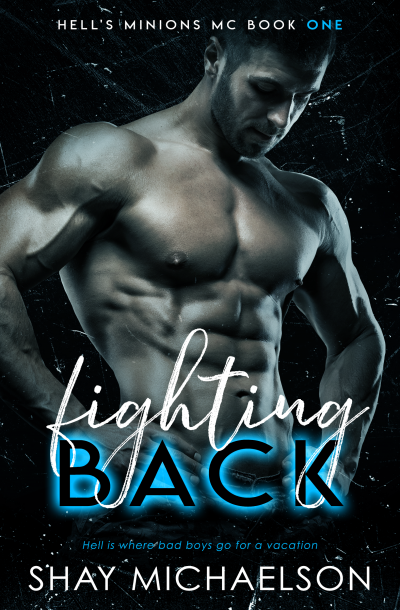 What do you do when the past you’ve been desperately running from finally catches up to you? Do you walk away from the life you’ve built and the woman you love, or do you fight?
Gray Landry was born and raised in the Hell’s Minions Motorcycle Club. Living under his father, Mayhem’s brutal thumb, his dream was to someday get away. When the chance to leave for ten years comes along, he jumps at it. The only problem with leaving the club is he will be leaving his younger brothers behind too.
Fast forward ten years…
Gray’s life is everything he could have hoped for. He has his own successful guns and ammo business. He’s married to a beautiful woman named Kendal. She’s loving, intelligent, strong, independent and one kick-ass mechanic. And lately, she’s been talking about babies.
Then, one day the phone calls start coming. Mayhem is demanding Gray come back. His time is up. It’s time to return to Hell. To Mayhem. But how does he walk away from the one thing that makes life worth living?
Not surprisingly, Mayhem forces his hand-come home or Kendal will suffer. Left with no other choice, Gray walks away, leaving his wife stunned and heartbroken.
As Gray’s new life moves forward, he sees the toll his decisions are taking on his wife and his heart bleeds. He knows if he ever wants to keep her safe and win her back, he’ll have to team up with his brothers and take down Mayhem once and for all. It won’t be easy with his father wreaking havoc, but they were going to end it or die trying.

For as long as I can remember, I have loved to read books and romance has always been my favorite. The dynamic between two people has always fascinated me. Who are these people? How did they meet? What is it that made them decide this is the one for me? The possibilities are endless and that's what makes it so fun.

On a more personal note, I am happily married and have two grown children. We have an Australian shepherd named Max and two cats, Milo and Mia who are not afraid to let you know when it’s time to eat.

I've always loved romance. I like it when the man and the woman don't have an easy time of getting together. I like that they struggle. I don't want the characters to be perfect, they need their flaws. They need to fight to be together in order to appreciate it when it works out.

“’Bout fucking time. I’ve been trying to get ahold of you, and I’m running out of patience.” His dad’s voice was harsh and commanding.

Gray tensed at the sound of his father’s voice—father being a relative term. The man was just a sperm donor as far as he was concerned. No matter how hard he’d tried to keep his past life in the past, he knew it would come down to this. Things between him and his old man were coming to a head and there was no way of stopping it, which was sooner rather than later if his tone was any indication. It suggested his father was seriously out of patience. “What do you want? I already told you I won’t come back and fight. I’m done. I’m out. I’m never coming back to the Minions.”

“Aw, come on, son,” his dad growled. “You act like you have a choice in the matter. By my recollection, your time’s up. You’ve had your ten years playing the civilian and then some. You’re lucky I haven’t tried to push it sooner. Time to come home.”

“Home?” Gray snorted. The man had to be joking.

“Why do you keep lying to yourself? You’re a biker, a Hell’s Minion, and it’s time you started acting like it.”

Gray gripped his cell phone tighter. His heart was hammering, echoing in his skull. God, he’d hoped Mayhem would’ve forgotten about him after all this time, but hope was for suckers too sheltered from the realities of life to know that there really were living, breathing monsters in the world, and they didn’t only exist when you closed your eyes at night. No, they lived and breathed in your waking hours too, making your life a living hell.
He could still remember the day their old president, Bear, had gifted him with ten years of blessed freedom—ten years of living out from under Mayhem’s controlling hand. When the decision was handed down, Gray felt as if a heavy weight had been lifted from his chest, letting him breathe for the first time in his life.

Six years into his time with the Army—five of those years with the Rangers—Gray got the news that Bear was dead. Since the deal for his ten years was made in front of every fully patched member in the Hell’s Minions MC, Mayhem would have to honor it or lose face in front of the club. There was no way he would do that, no matter how badly he wanted to bring Gray home early, because he had aspirations of being the next club president. He couldn’t be seen as the type of leader who would go back on his word.

The sound of his father’s voice barking in his ear pulled him out of his trip down memory lane. He rubbed a hand down his face. “Yeah.”

“Yes, I fucking hear you,” he yelled into the phone. Man, the prick knew how to push his buttons quicker than anybody he knew.

“Good. I’d hate to have to get your attention. Next time I call, you fucking answer,” Mayhem demanded. “You’ve got one week to get your shit together and get your ass back to the clubhouse where you belong.”

“One week? What’s the fucking rush?”

“Because I’ve waited long enough. You should be grateful, you little shit, that I allowed you a little bonus time. Now it’s time to get your ass back to the Minions. I have plans for you.”

“Plans? What kind of plans?” Gray dreaded hearing what Mayhem had in mind for his return.

Mayhem’s chuckle was dark and sinister. “You know what plans, Gray. You’re getting back in the cage. You’ve got one week to come back to the club.”

Was he serious? One week? How the hell was he supposed to deal with Kendal? With Ditch, his partner? He needed more time.

There was something more to this rush to get him back. He was sure of it. The old man had been trying for the last few months to get him back, but for some odd reason, Mayhem hadn’t really pushed for it until now. There was more to it than just getting back in the cage. He just wasn’t sure what it was yet. “Four weeks.”

“You got two fucking weeks to get with the program. You better show your ass Friday night at the clubhouse…and Gray? Don’t make me come get you.”

Be the first to review “Fighting Back: Hell;s Minions MC Book 1 by Shay Michaelson” Cancel reply