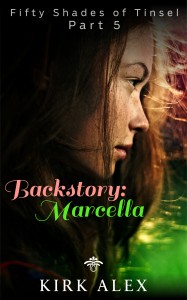 They call him Tubesteak. Jimmy Riff, a well-endowed preacher’s son whose life is adrift, stopped off in Hollywood on his way to Oregon in search of a lost love and found himself trapped in the sleazy underbelly of LA. Now he’s a gigolo, dubbed James Kidd by his tough-guy manager, the ex-boxer Benjamin T. Styles, forced to do Styles’ bidding and sleep with Hollywood honchos both male and female in order to further Styles’ obsessive agenda of getting a serious movie role. Jimmy is his meal ticket back to stardom, and he intends to exploit him any way he can. Good-natured Jimmy is OK with it…up to a point.

Ben Styles is just one of the troubled and hard-bitten characters we meet in this searing exposé of Hollywood. There’s Lisa Koch, a Nazi-worshipping agent whose tastes run to BDSM and whose unauthorized “scene” with Jimmy turns abruptly nasty. R. Edward McFluff is another ambiguous character, a top movie director from the UK who has the hots for Jimmy, but who will settle for watching and getting off as Jimmy beds his young protégée from Oklahoma, Angela Bliss. None of these people care about Jimmy, of course…but there’s a beautiful young woman he meets at a sleazy party in the Valley who might be the answer to his dreams…if only he can get the relentless Styles off his back.

Kirk Alex’s tour de force series is a blend of dark comedy, erotica, and sordid realism. Fifty Shades features plenty of drama, suspense, and explicit situations, and will appeal to fans of Bukowski and Hubert Selby, Jr. For mature readers.

Favorite books over the years would include: The Bell Jar; Post Office; Ham On Rye; Double Indemnity; the Last Good Kiss; A Confederacy of Dunces; Point Doom, et al.