You are here: Products Fevered Longings by Jane Burrelli 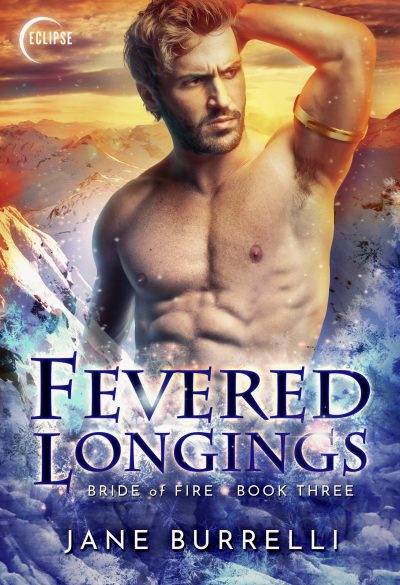 When the gods breathed life into us, they blessed us with an element. Pity they didn’t care to bless us with anything else.

Mira had hoped she might find happiness in the arms of the Ice Lord. She was wrong. Political forces have driven them apart and the consequences are devastating for the fated mates. Despite all the past hurt and misunderstandings her fever for the infuriating man has not been extinguished, no matter how much she wants it to be.

Zorren never feared the cold until he’d tasted Mira’s warmth and passion. Mira is his and he is determined to claim her and restore her to her rightful place beside him: on the throne, in his life and in his bed. Now if only the little firebrand would cease her fruitless attempts to drive him away.

With rumblings in the South and conspiracy in the Iceari Court, Mira and Zorren need to present a united front more than ever. Are they brave enough to seize their second chance? Can they rebuild their trust and allow their love to blossom. Or will it be strangled by resentment and stubborn pride?

When I realised that the world was not hiring for a ‘sarcastic but benign Supreme Ruler of the Universe’ I’ve decided to focus on my passion. By day I work in a UK company’s finance department and by night I become my alter ego Scribble Girl or as my good friends have affectionately dubbed me the 'sex author'. Always armed with a notepad and pen in the black hole I call a handbag, I have been writing never ending stories since the age of 11 and this all stemmed from my love of reading.
I love reading. Period!
I’m part of the Harry Potter generation and while waiting between books would literally devour any book I could get my hands on. Let’s put it this way J.K Rowling has a lot to answer for. I adore that there is no end in sight to where your own imagination can take you and that between the pages of a book you are transported to another world.
Happy Reading!

“So this is where you are hiding,” I was far too happy to hear Zorren’s voice for my liking and tried to keep my face neutral. “I am not hiding.” A guilty blush creeping up my cheeks and his presence pulled my gaze from watching the flurries outside. Without conscious thought the taut line of my spine softened, my body leaning towards him of its own accord. I pulled on my stiff-necked, Firelander pride to keep my feet firmly rooted on the spot. If our paths had crossed directly after my nightmare I don’t think anything could have stopped me from closing the distance between us and going to him. But in my heart I wasn’t ready to forgive him. Zorren’s lips tugged into an indulgent smile at my instant denial and said heart did a little stutter. Why was he in such a good humor? “Then what are you doing?”
“Taking shelter from this horrendous weather,” I growled. The wind groaned and an icy draft blew from under the door. “How do you stand being trapped in this place for days on end?” I didn’t want to read another book and there was no instrument for me to practice. How did they stand it without being driven mad? I longed to be outside and feel the sun on my skin, craving the now foreign heat. Outside, the snow became thicker and heavier, mocking me even now, soon it would be a whiteout.
Sympathy lit his eyes. “Of course, I keep forgetting this is your first winter. It is usually a respite from Royal duties…”
“Well, good for you.”
Sarcasm dripped from every word but he continued on, ignoring my barb. “However, I suppose it does take some time to become accustomed to it.”
“Accustomed?” I laughed throwing my arms up in air. “I’m about to go insane!”
“I could make a few suggestions—”
I snorted and my eyes flicked down to just below his waist, muttering darkly, “I could imagine the sort of suggestions you would make.”
“I’m not going to lie, Mira, most mates remain in bed on days like this and find other ways to work off any reckless energy.” His words reignited the memory of the last time we had been together, my muscles deliciously trembling and exhausted, too tired to move. My tongue poked out and wet my lips. My body’s secret places heated at the memory that would certainly— No! What was I thinking? I was not a slave to my body.
“I’ll pass.”
Zorren studied me for a moment, “Do you play stratis?” My brows drew together, I did but not for a long time, my list of royal appointments did not leave much time for games.
“Yes.” Reaching into a drawer he pulled out a large box that rattled as he moved.
“How about a game to pass the time?”
“I don’t think that is wise.” The thought of spending that much time in his company, in close confines, I didn’t know if I could fight his pull for that long.
“What do you have to lose?” My sanity? Oh, wait… too late. “Do I scare you that much?”
“Do you think I’m so easy to manipulate?” An obvious dodge if ever there was one. Giving in to my agitation, I crossed my legs and curse the man if his tactic wasn’t working, my hotheadedness made me quick to rise to the challenge.
“Is that it, Mira?” His blond hair fell half over his eyes and Zorren shook it back, the boyish gesture made him appear younger. “Are you afraid to be alone with me?” I was being played, but if I left now, I’d be accused of running. If I stayed, I would be playing right into Zorren’s hands—if I didn’t think I could withstand him. If. I flexed my claws.
“I’m afraid of nothing, Ice Lord, please sit. I can spare you one game.” My words underscored with condescension, Zorren’s jaw clenched at the use of his title. Ah! The petty revenge was sweet. We began to set up the familiar board, the square divided line by line to form the shape of a pentacle, each tip of the star forming a separate territory. The aim of the game was to conquer all the territories while taking your opponent’s pieces and defending your standard at your base of origin. You could win two ways, claim all the territories or capture your opponent's standard. Wooden pieces split into two colors, polished to a shine with use. They carried different values depending on how they were allowed to move, indicated by their descending varying height. Our hands brushed. I jerked back into the chair, immediately breaking the contact. Zorren’s blue eyes gauged my reaction and his grin widened revealing white, even teeth, baring a striking resemblance to a hungry wolf that had just inched closer to its prey. I sucked in a breath, Khatri give me strength it was going to be a long game.