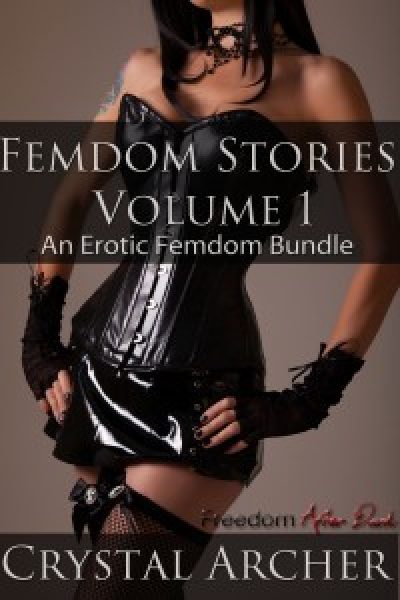 Release control into blissful submission to your mistress

Stephen’s recent success had earned him the admiration of his peers and a big promotion at work. Brimming with confidence and feelings of power on the night of the celebration, a cocky slip of the tongue to his wife and domineering mistress would be his undoing. Before he could leave, she would have to remind him who was in control. Nicole needed to teach him who truly holds the power.

With college ending and Sam’s lease about to expire, her window of opportunity to dominate and control her submissive best friend Kevin was about to close. And she wasn’t about to let him slip away without tasting the pleasure of her dominance.

Sam had a plan. She would invite him over to help her move. And he would come running at her beck and call, like the good submissive boy he was.

Crystal Archer lives in a small mountain town. She explores her kinky side through the written word.

I resolved to comply with her demands as perfectly as possible, no matter what shape those demands might take tonight. My mind ran over the myriad possibilities that she could use to discipline me, and I mused over what form of punishment she could have in store. On any other night, she might take her sweet time, binding me into an inescapable and masterfully tied array of knots, unable to move or protest. She might take her time with the crop and the flail, keeping me on my toes as to when and where the next blow would land, until I screamed and begged for mercy. Or perhaps she would bind me in chastity, teasing the rest of my body with gentle strokes from her fingernails as she dug her teeth into my skin.
But no, not tonight. Tonight she knew that despite the fact that she would be teaching me a lesson, we were under a time constraint. And whatever she had planned, it was going to happen quickly. There was only one thing I could imagine that would fit that bill. And I wasn’t sure I was ready. But tonight, I was going to be a good boy.