You are here: Products Fate Cuts Both Ways by Barbara Storey 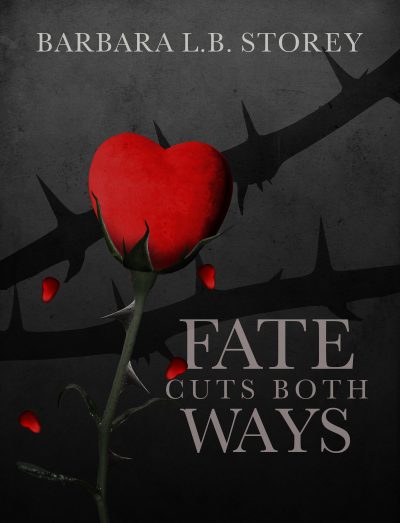 A set designer and a movie star are stranded together in the wilderness after filming. Upon realizing that no one is coming for them – her car won’t start and he told everyone not to bother him – they decide to rough it out together.In an unlikely twist of fate, the little moments of smiles, flirting, openness and comfort begin to build into something more. The stranded weekend turns into a romantic fantasy.As all fantasies do, however, it comes to an end. Jon Jacobs is a movie star, after all, and Becca is just, well, Becca. When they return to the real world, friends and family begin to doubt the longevity of the so-called fling. How could these two people, who are so different and from different places, be this into each other after such a short period of time? Who is using who here?In the midst of these doubts, something happens that could bring them together forever. But will it last? Will fate allow it?

Barbara L. B. Storey is a writer, photographer, and digital artist. She loves to write, to read, to travel, and is also crazy about baseball. She was born and now lives in Canada, but is a former resident of New York City and misses it very much.

She's also particularly fond of certain book series – Harry Potter, The Lord of the Rings, and Outlander – of poetry, historical fiction, mysteries and thrillers, biographies, and history of almost any kind, but particularly art and political.

She has lived several different, interesting lives in both North America and Europe, but through them all, one thing has remained true: creating is essential. Writing or art – as long as she is making something and telling a story, she is happy.

"Fate Cuts Both Ways" began as a writing challenge in an online forum I once belonged to. The rules were that a couple should find themselves stranded somewhere for a weekend (not an easy task in today's connected world), and by the end of the second day they would be falling in love, enough to get physical, at least. It was SUPPOSED to be a short story, but . . . the characters had other ideas, and I ended up with an an almost 400 page novel, and ideas for a series! So far, only the first book has been finished, but we'll see what happens!

(From Chapter One of "Fate Cuts Both Ways"_

Becca stared at her mobile, not wanting to believe what she was seeing. No, it couldn't be . . . a momentary blip in service, that was all. It happens all the time. She switched the phone off, then back on again, willing it to correct itself.

For the first time, a tiny thrill of fear scrabbled in her chest. If her car was dead . . . and her phone wasn't working . . . how was she going to get out of here? She couldn't remember how far away the nearest town was exactly, but she could remember driving for almost an hour past a small group of houses to get to this location. This situation was something altogether different from roughing it, and Becca was suddenly a little frightened. She took a deep breath to calm herself and tried to think. Car dead, phone not working—try as she might, the only option she could think of was to start walking.

Then two things happened, one right after the other, that made her jump and scream. A deafening crack of thunder, and a voice shouting, "Hello! Who's there?"

Becca's first instinct was to quickly lock all the doors. Who could possibly be out here in the middle of nowhere? True, she was, but she had a reason to be. And she was sure everyone in the crew had left. Someone else suddenly appearing on the scene was nothing short of frightening. Once the doors were locked, she peered nervously out the back window and saw a lone figure walking towards her car, coming from the direction of the small river that ran behind the dilapidated house. And a few seconds later she realized who it was, though part of her brain refused to believe it.

It's him . . . it's Jonathan Jacobs!! Becca’s jaw dropped. What in bloody hell is he doing here? But her next thought sent a rush of relief through her body. If he was still here, then there had to be someone else with him. He was never without minders or bodyguards or any of the other people famous actors always had around them. Reassured by that thought, Becca hesitated only a moment longer, then unlocked her door and slowly got out of the car.

As he got closer, her feeling of relief started to fade. He was all by himself, come to think of it—not a minder in sight. And he looked, well, a little confused, to be honest. Confused . . . and gorgeous. She hadn’t seen him up close during the shoot, but as he approached, Becca took in his smooth, pale skin—his cheeks slightly flushed at the moment—the dark eyebrows arched over intense, deeply blue eyes, his strong nose, and a well-defined jaw and chin, showing off the exact right amount of dark stubble to best advantage . . . all the features that sent his many fans into a swoon when they saw his image on the big screen.

Jon Jacobs was every bit as beautiful in real life, she realized—even as out of sorts as he seemed to be. His dark, chestnut-brown hair was messed up and standing on end, there were crease marks on his cheek, as if he'd fallen asleep on something wrinkled, and he was holding a large, dripping wet handkerchief in one hand. Despite the situation, she couldn’t fail to notice how adorable he was, too, with his mussed hair and sleep-heavy eyelids. Yes, definitely as yummy in person as I suspected.