You are here: Products Faster by Deana Birch 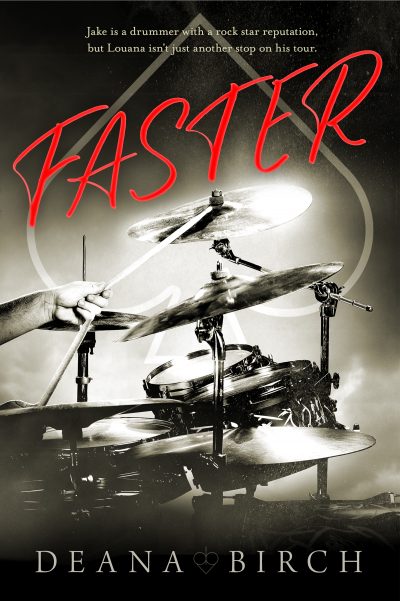 After a quick but memorable fling, Louana Higgins leaves the drummer for The Spades exactly where he belongs: a tour bus. The junior producer knows she’s dodged a bullet. Because, despite his melt-your-heart chocolate eyes and rising fame, Jake Riley is not boyfriend material. And those messages he sends in the middle of the night get filed under, “drunk text, best to ignore,” without delay.

Twelve grueling years of paying dues has finally resulted in a hit song for Jake. But, knowing the new zeroes in his bank account come with as many ways to blow it, he craves stability. So, stocked with an arsenal of charm, and a reminder of what happened against her front door, he persuades Louana to see him again the next time he’s in town. Now, certain he’s found the calm to his storm, he asks her for the previously unthinkable-monogamy.

Hesitant but smitten, Louana agrees. And as if long distance and groupies aren’t high enough hurdles, Louana’s new beau also comes with a malicious lead singer. Having lost his favorite partner-in-crime, the front man is ready to tear the couple apart by revealing a secret from Jake’s not so distant past. Unable to discuss it with Jake for fear his bandmate’s betrayal would mean the demise of his flourishing career, Louana must now decide if she can live with Jake and his secret or leave the rock star she loves.

The day after graduating college, Deana Birch hopped into her teal-green Geo Storm and left her Mid-Western roots for sunny Los Angles. Two years later, her job in advertising transferred her to the big apple where she met her own Happily Ever European. She currently lives in Switzerland where she teaches Hot Yoga and writes steamy stories.

Louana Higgins is a character that invaded my brain for years before I put her to page. I hand wrote the first draft during one summer while my kids ate a lot of pasta. The story really came to life when I hired my editor and brought in Jake's POV.

“Look,” I said. “You don’t have to do this friend thing. I’m sure you have a million better things to do than pity friend a girl from Indiana.”
A small smile grew on his face, and his eyes narrowed in on me.
“Thanks for dinner,” I continued. “It was a lot of fun, and the tacos were amazing.” As I turned to put my key in the door to enter the courtyard, the heat of Jake’s body invaded my personal space, and his breath warmed my neck.
“Louana?” he asked in a deep whisper. The sound of him saying my name went straight from my hairline to my very happy place. When I turned around to face him and our eyes met, it was as if he could read me perfectly.
Hunger. Lust. Desire. I tried to blink them away, but they weren’t going anywhere. Jake put his hands on the gate, framing me into him. My entire body burned hot, and before I knew it, his mouth was on mine and his tongue was parting my lips, searching for its counterpart. He kissed me hard, deeply, madly. My heart raced. Grabbing his hair at the neckline, I gave it back just as hard, just as deep, and just as madly. It had been far too long since I’d kissed a man, and my hunger overrode any modesty.
But it was his embrace, and he drove it. He eased the pace, teasing every ounce of me. And then he stopped and pulled back, leaving barely an inch between us. His eyes danced with mischief and landed on my mouth, as if the last five minutes hadn’t satisfied him enough. He tilted his head and leaned in again. I was ready and oh so willing for round two. Instead, he tenderly bit my bottom lip and tugged it in his direction.
He let go, and with a devilish twinkle in his dark eyes, he said goodnight.
I couldn’t believe it when he released me from his thralls and walked away. He left me standing there stunned, shocked, and in a deep pool of sexual frustration.
Jake Riley was a terrible friend.

Be the first to review “Faster by Deana Birch” Cancel reply