You are here: Products Fares and Fur by BP Slitt 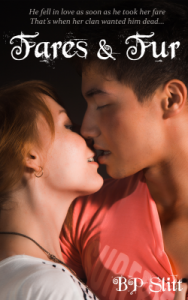 Fares and Fur by BP Slitt

A Queen werewolf named Edie was beginning to lose control of her pack. They wanted her to hunt and eat humans. She forbade it, but she feared they no longer listened to her. When Mason the cab driver saves her from a confrontation with her mate, her pack targets him as their next victim. Edie defies her pack to protect him. Mason finds himself intoxicated with this mysterious, beautiful woman with the dangerous boyfriend while Edie finds it increasingly difficult to ignore what the handsome man could offer her as a new partner.

Finally, a Historian werewolf named Drusilla finds herself living for decades in a zoo. Isolated and content, she’s happy to spend her days with her family of wolves. But when a woman offers her and her pack a place in her new clan, she finds it hard to decline the opportunity to elevate her pack to werewolf status, even if it puts her back on the radar of those looking for her.

Beatrice P. Slitt lives in a small place out east in Canada. She lives with her bees and extremely attractive gal pal. She’s overeducated and underprepared in most aspects of existing as an adult human being. She could probably pass as a half-decent sloth though. Her hobbies include writing, cat petting, watching movies and television shows, playing video games, crying about video games, asking other people to play video games while she watches, and other forms of couch potatoing.