You are here: Products Fancy Lady & the Desperadoes by Dee Dawning 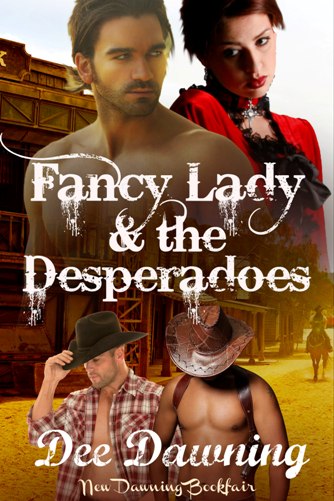 Well-bred and genteel, Valerie Johnson travels from Boston three thousand miles by train and stagecoach to join her husband in Virginia City, Nevada, only to discover she is a widow. Out of money, unable to find respectable employment, she accepts a temporary position as a courtesan at Rosie’s Parlor—an elegant Virginia City brothel.
Ultimately she is rescued from the ‘Sporting Life’ by Duke Dugan, a rebel captain who, along with his two brothers, is on a desperate mission for the despised Confederacy.
She would tell the authorities, except there’s one problem—she’s fallen in love with him.

If you like warmth, live in Arizona like Dee Dawning does. If you like to read hot sexy stories born and raised in the sweltering summer heat of Arizona, check out his scribblings. Dee has been writing saucy romance stories and novels for twelve years. At this time he has over fifty titles available. Dee and his lovely wife currently reside in Phoenix Arizona, where he writes a novella every four-to-six months and a novel every nine to ten months.

I started a Western Contemporary series called Menage Amour and always wanted try my hand at historical. I'm very proud of this book and I sometimes think it's my best. Eventually, I'd like to continue the story in California. Yes, thanks to Valerie Johnston, the Dugan Brothers survive certain death.

Chapter One
Clothes make the man. Naked people have little or no influence on society.
—Mark Twain