You are here: Products Famous: The Rockstar Series by J.J. Smoke 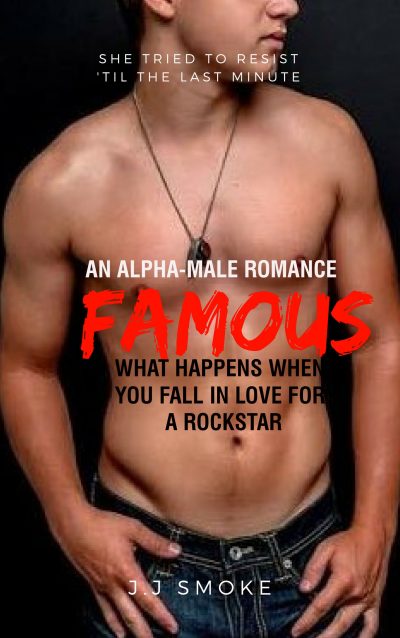 Twenty-one-year-old Clarice Parker is in love with Gus Smith since she was a teenager. He’s her favorite Rock Star. When she applied to an internship for the Famous magazine, she didn’t expect her first task to be to interview the man of her dreams. She thought she had no chance of ever having him. Men like him could sleep with anyone and he wouldn’t pick her, or so she thought.
Gus Smith is a worldwide famous singer. He could have any woman on the planet, but he chose Clarice Parker. The only thing in the way is her job, but Gus isn’t the kind of guy who takes no for an answer. He’ll do anything in his power to seduce her, make her his. His quest is not a matter of if but when she’ll give in.

J.J. Smoke lives in California and graduated from college with a Bachelor's in English. She is an avid reader of all things science fiction and YA can frequently be caught curled up in her favorite chair with a nice cup of coffee, a blanket, and her Kindle.

When not reading or writing, she can be found trying to lure the affection of her grumpy dog, who is very good at being just out of reach for snuggle time.

I find fascinating people's obsession and curiosity surrounding Rockstar and celebrities in general. Also, one of my favorite movies is "Almost Famous" so I got some inspiration from that one.

I’ve been in love with The Troopers my entire life, especially with Gus Smith. They’re my favorite band and they just announced that they’re splitting. Solo careers, every fan’s worst nightmare for a band, but now that my junior year in college is about to start, I decided to leave all that behind. It’s time to grow up, or at least pretend I did. I’m 21 so, I want to act like an adult.
I take the posters off my bedroom wall so my new roommate won’t see it. Cora, my last roommate graduated last year. I heard she got a job at the New York Times, but it could be all a lie. People tend to do that when they just left college and are desperate to prove to everybody that they got it. I just hope that if I ever leave college with my journalism degree, I won’t have to work with my own blog while I’m telling everyone that this is the new media when in fact I want to work at a major publication.
I love blogs. I just don’t want to have one.
I clean everything in my cozy dormitory, which is just another word for small and not luxurious. Everything is perfect for the new roommate.
Someone knocks on the door and I open it. My new roommate Cynthia gets in. She wears glasses and has a ponytail. I can tell before she speaks that she’s a shy girl from the countryside. She doesn’t have lots of friends and doesn’t have many social skills. Her parents were good to her, so she never drank because she loves following the rules. If I had to take a wide guess I’d say she’s still a virgin.
“So, where’s the booze?” Cynthia asks.
An entire semester of investigative journalism for nothing.
“Well, I don’t have any in the room, but are you sure you want to drink for the first time here at the dormitory?” I ask.
“Please don’t tell me you’re one of those prudes who snitch on people?” she asks. “or worse don’t tell me you’re a virgin who never drank.”
“Of course, I’ve drank and had sex, I’m just saying you want to wait for the party.”
The last thing someone wants in college is for people to think you’re a virgin or that you’ve never drank. I have done both but I’m no expert. I only had sex with Joshua, my high-school boyfriend. We broke a few weeks before I left for college because I thought it’d be better. Now about drinking, I’ve been drunk only once and since I remember everything I’m not sure if it counts.
Cynthia is very different from what I thought she was. She drinks, has plenty of sex for what she tells me, and does some pot occasionally. Maybe it was the spectacles or the ponytail. She’s also very noisy, taking a look at what I’m putting inside the box.
“A poster of The Troopers.” She says.
I freeze. Every girl loves them but I don’t know what she thinks about it and I don’t want to sleep in the same room with a person who doesn’t understand good music. It’s because of them that I decided to apply for an internship at a music magazine.
“Do you like them too?” I ask.
“Like them? I love them. They’re the best. I cried five days when they announced the hiatus that everyone knows that it’s actually code for we’re never getting back together, but we don’t want any crazy fans committing suicide.”
She looks at the poster one more time before putting it back.
“So, what’s your major?” I ask.
“I’m’ taking this year to figure out exactly what I’m doing. OMG!” She looks at my other poster. “I also have a huge crush at Gus Smith. I would let him do whatever he wants to me. I would fuck him hard.”
Her language makes me uncomfortable. She stares at the wall and I think she’s imagining the everything she talked about. A knock on the door saves me from this awkward moment.
Peter opens the door. He’s an exemplary student, so the Dean makes him run errands for him.
“Dean Michaels wants to talk to you, Clarice.” He says.
I don’t even ask if it’s now. I go immediately before I have to spend one more minute with Cynthia.
I go to the Dean’s office and he’s there waiting for me.
“Please sit, Ms. Parker.”
I sit and so does he. I’m nervous at what it can be. I didn’t do anything wrong because I’m boring but who knows what he might think I did.
“I called you here to talk about your application to the Famous magazine.”
I’m tense sitting straight making sure I look serious, but then I’m relieved for a moment.
“The internship’s answer comes out only in two months.” I say.
“Well, they’ve anticipated,” he says making my heart punch my ribs. “They chose you. They announced it earlier because they want you to interview this Rockstar that is going solo.”
My heart beats even faster. I try to remember about any bands that split recently to make sure I’m not getting ahead of myself, but I can’t think of none, except them.
“Gus Smith from The Troopers?”
“Yes,” he says. “That’s the name. They want you to fly tomorrow to Los Angeles to interview him. They said that all the details will be on your email.”

Be the first to review “Famous: The Rockstar Series by J.J. Smoke” Cancel reply