You are here: Products Falling Objects by Jean Carrier 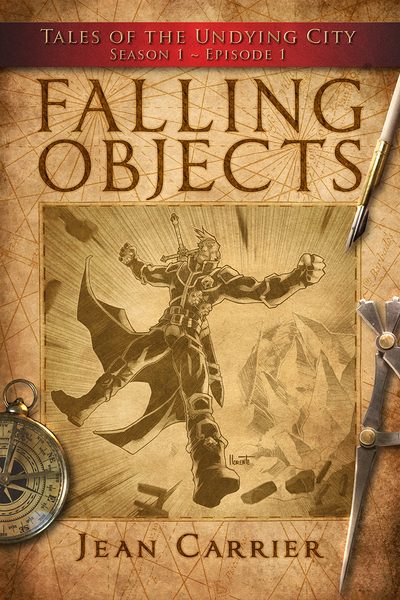 Sergeant Hektor Huxley, permanently scarred by the disastrous operation at Caer Griefheart five years ago, struggles to save the scattered members of his squad. Hailed as a hero for recapturing Hill 422 from the Deathwalkers, he knows none of them deserve the much bandied title of “Hektor’s Heroes.” On this fifth anniversary of the defeat at Caer Griefheart, can he rescue two of his men who are wandering the Deepstrom Plains hunted by the Moonhunters, a troop of fierce mercenaries?

This book constitutes the first episode of Season 1 of Tales of the Undying City, a weekly epic fantasy series also available on Patreon.

Jean Carrier has worked in the games industry for almost 25 years, successively as Editor, Game Designer, Producer, Senior Producer, QA Director, and Accounts Manager. Having learned a great deal about storytelling and entertainment from that industry, Jean is now making a big leap into the world of writer with a first offering, “Tales of the Undying City.”

I wanted to dive into a fantasy world that was about more than dungeons, dragons, magic swords, cursed rings, and your daddy's dwarves & elves. Why is it that fantasy worlds are exclusively about epic quests and not the impact of magic on the daily (and sometimes ordinary) lives or its inhabitants?

After years of avidly reading the classics of fantasy, I wanted to share my own perspective on how fantasy should be written in the 21st Century.

Hektor stepped to the aft railing and unhooked the safety chain. Everybody knew what that meant—the drop was imminent. The soldiers fell silent.
“It’s dark tonight,” Hektor added, “and the winds are strong. Stay sharp, trust your training and keep an eye out for each other. No heroics. Blake, you got that?”
“Got it, Sarge,” Blake said. He wasn’t smiling anymore. Nobody was.
Hektor pulled two grenades from the ammo strap that crossed his chest and lifted them up for all to see.
“Get your grenades ready. Illumination in the left hand, explosive healing in the right. Don’t hesitate to use them. We have plenty more back at camp. Y’all do this right, this is gonna be a cakewalk.”
While the soldiers followed his instructions, Hektor saw Lieutenant Morwood step out of the forecabin and head his way. His brows were furrowed with concern.
“Everybody line up!” Hektor shouted, his eyes still on the lieutenant. "We’re dropping in a minute.”
Morwood leaned into Hektor’s ear. “Sergeant, a word.”
“Yes, sir.”
They stepped away to stand next to the port-side railing, out of ear shot from the soldiers.
“A message just came in,” Morwood whispered. "Orders are confirmed, the mission is a go. I’m sorry.”
Hektor’s shoulders sagged a little. He caught himself and straightened up.
“Sir, this is a suicide drop.”
“I know,” Morwood said. “We've talked about this.”
“We’re not going to rescue those mages or medics. We’re just going to get slaughtered, that’s it.”
“I know,” Morwood repeated.
Hektor repressed a sneer of disgust. The lieutenant may be just a boy, but he was still his commanding officer.
“What about you, sir? You okay with making this drop anyway?”
Morwood shifted with obvious discomfort, looking for his words. It only took a moment for Hektor to realize the cause of his hesitation. The hot ball of anger he had been suppressing flared up.
“Aw shit, sir, are you serious?”
“There was a message about that too,” Morwood admitted.
“Sir, if you’re not dropping, that’s the message right there.” Hektor was finding it hard to contain his indignation.
“It’s not my call, Sergeant.”
“Sir—” Hektor started. Morwood cut him off with a sharp gesture.
“Sergeant, it’s not my call.”
Hektor held the lieutenant’s gaze for several seconds, searching for cowardice or callousness. He found neither.
“Troops, thirty seconds, get ready!” He shouted the words, his eyes still on Morwood.
“I’m sorry,” the lieutenant said. There was no duplicity in his eyes.
“You could always disobey orders,” Hektor said.
“I know you’re angry…”
“Damn right I’m angry!” Hektor growled. “This is stupid. The stupidest thing."
Morwood nodded “I don’t disagree.”
“Who’s the officer in charge, then?”
“You are.”
Hektor shook his head. “The commissioned officer, sir. I’m a sergeant.”
Morwood shook his head. “They trust you. You’re their best shot. Even if I dropped with you, I’d be useless. We both know that.”
The lieutenant was right, though Hektor found the whole notion ludicrous. Would anyone still trust him if they knew what he’d done? Morwood surprised him, however. Despite his age, he displayed surprising courage and humility. Not that it mattered. Hektor was still furious at him. Who else was there to hate?
“You’ll go far, sir,” he said.
Morwood closed his eyes and nodded. “May the Source guide you.”
Hektor turned from him and headed for the aft railing, where all the soldiers were lined up and ready to jump.
“Yeah,” Hektor muttered to himself. “No one else will.”