You are here: Products Falling from Grace – Part Two by Laura S. Fox 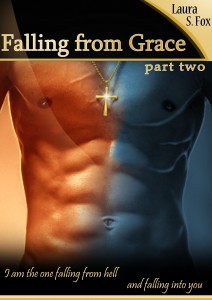 Without Marco’s protection, Liam becomes a target for other inmates’ jokes and insults. While he tries hard not to pay attention to anything happening around him, Regina seems to be the only one realizing the danger he really is in. Good deeds never go unpunished, though, and the redhead is soon caught between the two men and the passion they still nurture for one another.

Danger takes different shapes, and Liam starts to see that true feelings could never be denied, no matter how much he tries to hide behind righteous words and ignore his heart’s desire. When he warns Marco of the danger the Italian is in, after he hears two Aryans planning to murder the mafia boss, he takes on a path he soon understands there is no coming back from.

Reaching an understanding with both his heart and his principles seems impossible, but, somehow, the pieces of the puzzle fall into place, and for the first time in his life, Liam realizes he is not alone. He no longer fears his falling from grace, but a question he bitterly thinks he knows the answer for:

Will there be a happy end?

Warning: Falling from Grace – Part Two contains depictions of sexual intercourse between men, violence, non-con scenes, and other themes that may make the reader feel uncomfortable.

When Marco took him after dinner to the place he knew so well, he didn’t protest. It felt natural to walk through that door, although it felt like ages had passed since they’d been there. The small room no longer looked frightening to him, as it had in the past. He waited for Marco to undress him slowly, saying and doing nothing.
Just when the man tugged at the leash, he reacted. He didn’t want to be treated like a pet. It felt nice to be touched and caressed like that, but he could not allow this.
“Marco,” he warned, trying to pry the leash from the man’s hands.
With a sigh, Marco unglued his fingers from the leather strap and then took the other end of the leash to wrap it slowly around his neck.
“What are you doing?” Liam asked, not understanding why his knees were turned to butter by the man’s slow moves.
“I am showing you, since you’re too stubborn to understand simple words. We’re tied together. Walk away from me again, and I’ll choke to death. Do you get it now?”
“No, no,” Liam shook his head, not wanting to believe what Marco was saying.
“Stop fretting about it like a kid. It took me a while to realize it, too. But here is what I think of your constant fear of falling from grace. Maybe there is no heaven and hell, no up and down, like we imagine. Maybe it’s a circle, and I am the one falling from hell and falling into you.”
It was too much. It felt as if he could not breathe. On his own accord, he grabbed Marco by the neck and kissed him. He was pulled into the tight embrace, large hands kneading his buttocks, as if wanting to reach inside as fast as possible.
Marco lifted him in his arms, and sat on the small bench, taking out his organ and slapping it against his lover’s ass crack.
“Tell me it is alright to put it in,” he asked simply, and Liam just nodded.
The Italian slowly wet his fingers and played with them at the man’s entrance. Liam gasped at the familiar feeling. Marco did not always use lube; he had failed so far to understand why. But he always did a good job to open him slowly, preferring his own saliva to make it slick.
The leash was carefully detached from Liam’s neck, and remained dangling against Marco’s chest. Liam was made to stand and turn, so that his buttocks were at the same level with Marco’s face. As his buttocks were parted and a deft tongue started rimming him slowly, he moaned shamelessly. He wanted the man inside, he could not care for heaven or for earth, as long as the sweet, relentless ache in the pit of his stomach was going to be soothed.
“Marco,” he begged.
“Yes, amore mio,” the brunet stopped for a brief moment from his ministrations.
“Please, hurry,” he added, a bit frustrated.
“Hurry where?” Marco asked innocently, and Liam could tell the man was grinning when saying that, even without seeing his face.
“You know,” he said embarrassed.
“Say it, caro. I want to hear it from your sweet lips.”
“Marco,” Liam’s pleading became more urgent as he felt the skilled tongue going deeper inside.
The man just continued, and he squirmed, trying in vain to push against Marco’s tongue. There was not enough pressure, just the pleasurable licking now veering towards his balls, allowing the brunet to take them in his mouth one by one.
“Have … sex with me,” he eventually whispered.
Marco stopped again. “Say it properly. Don’t act like a virgin about this, I know how much dick I’ve given you already. If you plan on getting more of it, say it nicely, love.”
It was clear Marco was having the time of his life, torturing him like this. He fought with himself. Marco loved talking dirty; it had always made him ashamed, but mad with desire nonetheless.
“Please fuck me, Marco,” he breathed out, and he was turned to face his lover and kissed roughly.
He was back straddling Marco, and the hard organ was pushed inside him in one go, making him gasp at the sensation of being invaded like this.
“Move,” Marco ordered, helping him to raise a little, by cupping his buttocks and using them to push him up.
And Liam did, impaling himself in the man’s cock, with all his pent up desire and longing from the past months.
Marco freed his buttocks to capture his face into his palms. They were staring into each other’s eyes, as they were breathing heavily.
“Ti amo, sei tutto per me,” Marco punctured his words with small kisses all over Liam’s face, while the ex priest continued to fuck himself into Marco’s cock with slow, languorous moves.
“I have no idea what you’ve just said,” Liam murmured.
“I love you, you’re everything to me,” Marco translated, staring into the other’s eyes, without blinking or even breathing.
I love you, too, Marco, Liam thought, but he could not bring himself to say it. He closed his eyes, allowing pleasure to engulf him and make him forget he was falling in love with another man.
A hand circled his waist, sustaining his effort, while another buried itself in his hair, and wild lips were capturing his. When his climax came, without touching himself, just from the constant hammering of his lover’s cock, and he felt Marco’s release deep in his body, he knew they were bonded forever, and there was nothing he could do or say to change that.
Deliciously wasted, he rested his forehead against Marco’s, breathing in the man’s scent. His right hand found purchase in the thing leather strap and wrapped it around its fingers to pull the Italian into a deep, meaningful kiss.

Be the first to review “Falling from Grace – Part Two by Laura S. Fox” Cancel reply