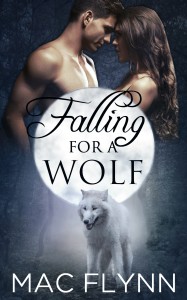 Christina ‘Chrissy” Monet aspired for something more than the life of a simple blog columnist. Her wishes come true when an old wooded property comes up for sale, and she pours her life-savings into the fixer-upper. The property comes with the added bonus of a handsome neighbor by the name of Adam Smith, but sparks fizzle rather than sizzle when she realizes he owns half the property she hoped to have. They part ways with biting remarks on her part, but she finds her carpentry skills aren’t up to the task and she’s forced into a relationship with the mysterious Smith. Strange happenings occur and she’s left wondering whether Smith has more up his sleeve than muscle.

Falling For A Wolf #1 is the first book in the FALLING FOR THE WOLF series.

Sign up for her newsletter to receive the latest news, promotions, and treats! http://eepurl.com/tm-vn