You are here: Products Falling: A journey to Submission by S. Hall 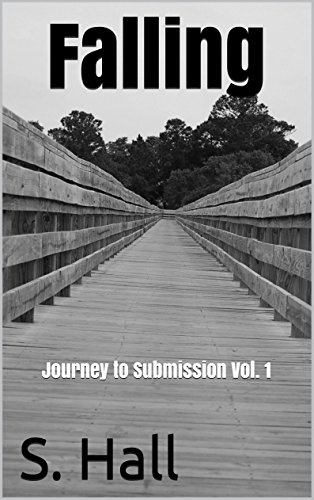 Falling: A journey to Submission by S. Hall

Tori Kassidy is in trouble. She's in too deep with some pretty nasty demons. If she doesn't get some extra cash soon… well, death will be the least of her problems. Desperate, she takes a second job working for the infamous Jericho Worthington. Things go from bad to worse when she discovers that Jericho is not only a vampire, but a vampire who is convinced that she belongs to him. What's a girl to do? Everyone knows how the vampires treat their mates. Is death by demon better than submission to a vampire? Trapped between a rock and a hard place, Tori must discover who she really is and whether she is willing to submit to her captor.

I live in Small Town Georgia and when not writing I wrangle three kids, a husband, and a cat into a semblance of family bliss. This is my first foray into the world of self-publishing. I love writing romance, and have been writing since I was kid. In my real life I chase call lights and sling pills all while trying to save lives and keep my patients pain free.

I enjoy both reading and writing paranormal romance and erotica. If I’m not reading it- then I’m writing it.

And so, there she was, on the floor with her skirt nearly up to her waist and her legs flailing wildly when she realized she was no longer alone. A man towered over her, his mouth turned into the sexiest little half smile and she froze, barely daring to breathe as those eyes pinned her in place.
Was she drooling? She surreptitiously pressed her lips together to make sure her mouth wasn’t hanging open and swallowed nervously. She had never seen someone like this in real life. Sure, on movies and in magazines you saw men who were so buff their muscles had muscles… but dear god, this man put them to shame. He wore only a pair of gray sweat pants and her heart did flippity flops as all her girly bits stood up and applauded.
This should be a crime. For a man who looked like this to go without a shirt… well, it just wasn’t fair. How the fuck was she supposed to keep a coherent thought in her head when she couldn’t even look away from the ripple of muscles along his stomach as he breathed? Not to mention that little trail of golden hair that started just below his belly button and disappeared into the sweat pants.
She forced her eyes up, gaining strength from the embarrassed flush she could feel creeping up her neck. She was blatantly ogling the man and couldn’t bring herself to stop. Where was her self-control? She felt herself flood with sexual heat. This man’s body alone was making her ache like she had never ached before.
Her eyes latched on to his nipples… his pierced nipples. She sucked in her bottom lip, biting it to keep from reaching out to snag the hoops and use them to pull him down to her. She shifted her hips slightly, knowing without a doubt her underwear were already damp and that knowledge only made her tremble with need.
This was what arousal felt like. She had tried to have an adventurous sex life, but had failed miserably. She had begun to think herself frigid… but this reaction was anything but. She forced her gaze up again. He had a strong chin that actually had a dimple in it and was covered in a day’s worth of stubble, as if he had just rolled out of bed and had yet to shave. His lips were a study in masculine beauty, full, but not too feminine and that half smile… well it did things to parts of her insides that she hadn’t really known existed.
His nose was a straight slash on his face that had obviously been broken a time or two, only adding to the overtly macho physique that nearly had her panting out loud. She finally met his eyes and found pure masculine humor there as he watched her make love to his body with her eyes. And they were purple. A light purple… they were goddamned lavender and ringed by long dark lashes that were criminal to have been wasted on a man.
His entire face was surrounded by a golden lion’s main of hair that fell in a straight waterfall of perfection to brush his shoulders. This man belonged on the cover of some kind of fitness magazine, or at least modeling underwear somewhere… or perhaps laid out in an issue of playgirl.
Her brain short circuited at the thought of seeing him completely naked and she tore her eyes away, only to finally notice how disheveled she looked and how exposed her lower half was. Mortification hit hard and pushed her into action. She cursed and finished untangling herself from the sheets while trying to push her skirt back into place.
She was completely out of her league here and even though the man made her want to drop her panties and put her ass in the air while she got to her hands and knees, she was not the type to give peep shows to strangers.
She rose up to her knees, finally shoving her skirt back into place only to realize that he had stepped forward and she was now basically face to cock. Her eyes shot to the floor, trying desperately to avoid looking at that prime piece of real estate. God this was awkward. She had to get off her knees and get the fuck outta dodge.
She scrambled backwards only to be brought up short as his hand curled in the hair at the nape of her neck. He tugged gently and she nearly went boneless. The sensation shot straight through her to her clit, and she shivered, refusing to look up. What was wrong with her?
“Are you running away, little bird?”
His voice was a deep melody that wound its way into her brain, making her breathless and needy. Oh god, if his voice could do that she shuddered to think what would happen if he pressed his naked body against hers. She would probably orgasm and pass out before the main event could even start. She felt her pussy clench at the mere thought.
He tightened his grip in her hair and pulled her head back, forcing her to look at him. “When I ask you a question, I expect you to answer. Let us try again. Are you running away?”

Be the first to review “Falling: A journey to Submission by S. Hall” Cancel reply