You are here: Products Fallen Angel by Alisa Anderson 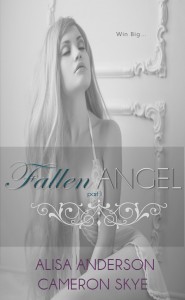 When Jess packed up her belongings and fled her small hometown in Kansas, she never looked back. Free from her family’s dark past she was finally able to pursue her lifelong dream as a professional dancer. She never expected to find herself at his door…or at his club.

Nikolas was unlike any other man she had ever met. Sexy…Alluring…Predatory. Dangerous. The kind of man with more secrets than even she had. Every instinct warned Jess against knowing him further, but she always did like playing with fire…

Nikolas Roman took one look at Jess and knew she was trouble from the very start. But something about the defiant twist of her mouth and the wide, haunted eyes of a damaged soul touched him in places he had long ago thought dead. He knew he needed to stay far away from her for his own sanity, but like a moth to a flame he was helpless to resist…

Working at Takers Gentleman’s Club was the last place Jess thought she would find herself, but she quickly learned how the game was played. See what you want, take what you can get…but at what cost?

She believes while life can take you down every path but the right one, eventually everyone will find their happily ever after.

My co-author Cameron Skye, as the book is semi-autobiographical about her.