You are here: Products Fall Again (The Rock Gods Book 10) by Ann Lister 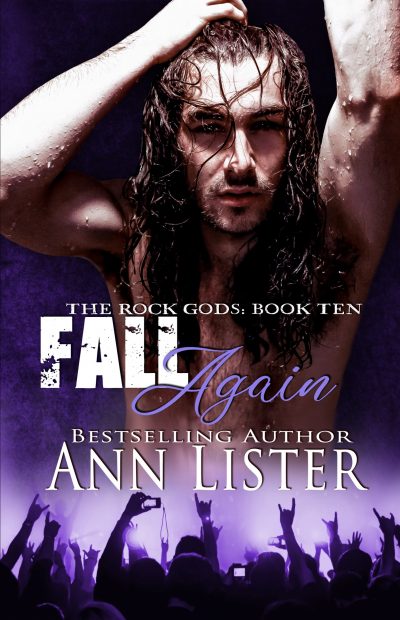 Dagger Drummond and Ryan Pierce have been married for years. They’ve experienced firsthand what living under the lights at center stage can do to even the strongest relationships, but somehow they’ve managed to remain on solid ground – until now.

Ryan realizes he wants more from their marriage, but Dagger is too fearful to give it to him. A disconnection is forged, and suddenly the two who are known as being the heart and soul of the dual touring bands, Black Ice and Ivory Tower, are out of sync. Having the backbone of the band family at odds sends Dagger home to make amends.

Just as their jagged edges begin to smooth, tragedy strikes and nearly rips them apart for good. It leaves one of them fighting for his life and both reaching for a future that may no longer be obtainable.

Fall Again is a full-length update story featuring the main characters from Fall For Me, Book One in the Rock Gods Series and comes with a hard-earned HEA.

Ann Lister is a native New Englander currently living in Florida with her husband. She has pulled details from her years living in the New England area and uses many local settings and landmarks in her novels.

The Rock Gods series gave her Bestselling Author status on Amazon. Beyond The Music, Book 7 in the series, reached #1 in Gay Erotica in the Pre-Order and held that spot for several weeks. The last book in the series launches the spin-off series, Guarding The Gods, which is releasing in early summer 2016.

Fall For Me, Book One in the series was a Finalist in the 2013 Rainbow Award. Each book in this series brings her two favorite elements together: musicians and the love between two men. These stories focus on what it truly means to love; love unconditionally, love without restrictions or labels, love without fear or judgment – to just simply love.