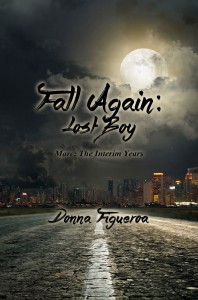 In the first book, of the Fall Again series, Beginnings, Marc and Lauren meet in the optimistic New York of the late 1980’s. While there’s an obvious attraction, decorum dictates that their relationship remain in the realm of a platonic friendship. Over time, this becomes increasingly difficult as Marc and Lauren struggle to maintain the façade of friendship to their closest friends, and to each other. But then, Lauren leaves New York, permanently.

The second book, Fall Again: Lost Boy, is Marc’s story. Marc finds himself devastated and alone in New York City. He’ll be tested and makes choices that will spin his life in different directions. On occasion fate intervenes placing Marc at the right places at the right times, providing him with exciting opportunities. Over time Marc becomes a better artist, son, brother, friend and above all, a better man. With the support and encouragement of old and new friends, Marc unknowingly begins a personal odyssey to find himself; an arduous journey that will eventually lead Marc back to a woman whose memory refuses to leave him.

She lives in Hollywood with her husband writer/comedian Tony Figueroa, and their three neurotic cats.

In January 2013, I reread my manuscript. I realized that I had a mediocre first draft. I also decided I had a pretty good beginning and end, but I had ignored the bulk of the story. I liked my characters and story too much to leave them stranded in a weak novel and decided to begin work on a second draft, and complete the story.