You are here: Products Fake It Real by Zahra Girard 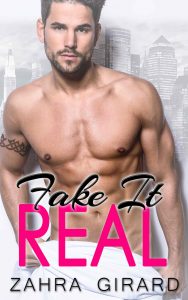 Fake It Real by Zahra Girard

Julian Stone needs a fiance to clean up his bad boy reputation so he can close a major deal.

He needs me. And I need money to keep my business open.

So he makes me a crazy offer: play his fiance for a month and I’ll get paid.