You are here: Products Fake ID Wife by Patricia Rosemoor 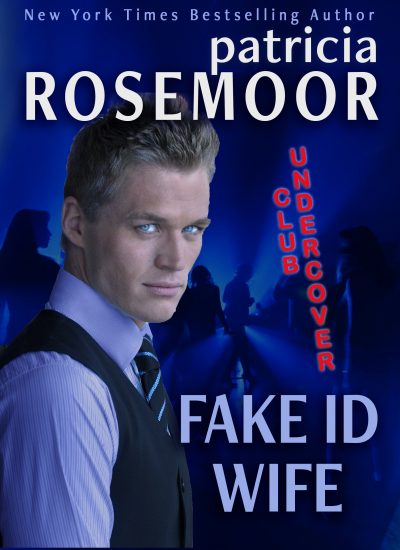 Convicted of a murder she didn’t commit, a desperate Elise Mitchell escapes prison to rescue her young son from the clutches of the probable killer, her late husband’s sister. With help from Club Undercover’s owner and employees, she dons a new identity and poses as the wife of the sexy head of security, Logan Smith. Unrecognizable, she works her way back into the Mitchell family’s life to get her son away from them. Falling in love with her fake husband, Elise has no idea that Logan has his own covert reasons to keep her close.

Patricia also wrote with partner Linda Sweeney as Lynn Patrick and Jeanne Rose. Check out the page with their backlist books.

“Someone knows.”
“If someone recognized you,” Logan said, “why haven’t we had a visit from the police?”
“The real killer’s idea of a sick, twisted mind game? Or an attempt to frighten me away?”
“Why?”
“So I don’t involve the police.”
“Why would anyone think you would want to draw that kind of attention to yourself when you’re presumed dead and no one is even looking for you?”
“A warning.”
Expressing her real fear made Elise too agitated to sit, so she stood and moved around to work off the negative energy. Still…
“If I stay around, what’s to keep whoever murdered Brian from murdering me, too?”
A conclusion that made her want to grab her son and take off for parts unknown at the first opportunity. To forget neat plans, just go blindly into the night. Or the day, for that matter. Just get out.
Where? How, without having the authorities on her within minutes?
She would have to wait it out for a few more days.
“Elise, calm down,” Logan said, taking her arm and stopping her from wearing out the floor. “The killer would have to go through me to get to you. That’s if he even recognizes you, which I doubt he does.”
Logan’s expression was so earnest that Elise knew he meant what he said. But what if the murderer did go through him? What if something happened to him because of her? She couldn’t stand the thought.
She shook her head. “This was a bad idea.”
“What was?”
“This setup. You putting yourself on the line for me when you don’t have to.”
Even if Logan had some motive of his own—a possibility that she hadn’t discounted—she sensed the integrity of his promise.
“But I want to,” he stated.
“Why? What if something happens to you?” She wouldn’t say the word die.
“I can take care of myself, Elise, better than you know. I’ve been doing it since I was little more than a kid. And I can take care of you.”
“If anything happened to you, Logan, I would never forgive myself.”
Elise reached out and touched his face, and a flood of emotions overwhelmed her. Emotions she’d been holding in check for far too long.
But when Logan pulled her to him and wrapped his arms around her, she gave those emotions free rein. She wondered if this was the actual moment she fell in love with him… or if she had loved him all along and only now was willing to admit it.
She’d been alone for so very long…
She trembled in his arms, but he only held her tighter. He almost made her feel safe.
Almost.
She remembered what she’d promised to do. What she would do. But first she needed her excuse to get into Mitchell House.
“I should get going,” she said softly. “Places to go, merchants to see, auction items to collect.”
“Right.”
When he let her go, he seemed chagrined. He touched her face possessively for a second and then stepped back.
Heart steadying, she took a breath that was amazingly calm—for the way he was looking at her was enough to take away her breath altogether.