You are here: Products Face First by Tug Johnson 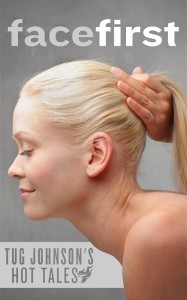 These days Amber wasn’t so certain.

She’d been married to Jim for fourteen years. They’d always been good together but lately their sex had degenerated down into something that ran more along the excitement level of an average-sized bowl full of whole wheat organic low-fat vanilla ice cream. In other words – boring. Fourteen years of marriage meant Amber and Jimmy had sex boiled down to a grim routine. It was fun, sure it was always fun – but Amber yearned for something a little bit more spontaneous.

Some kind of a surprise.

It turns out that Jimmy has been feeling that same way too.

It turns out that Jimmy has prepared a little bit of something different for his wife Amber this evening.

It starts out with a blindfold.

Jimmy’s got a night planned for Amber that she isn’t EVER going to forget.

He and his buddy Hank…

In the meantime – wash careful under that turtleneck and change your shorts every day. Just because a fellow’s got bad taste doesn’t mean he ought to taste bad.

Sometimes a story just comes gushing out of you – long hot sentences just splashing out onto the page.

Chapter 1 – An Unexpected Surprise
Most people love coming home from work.
These days Amber wasn’t so certain.
She’d been married to Jim for fourteen years. They were still happy together but lately their sex had degenerated down into something that ran more along the excitement level of an average-sized bowl full of whole wheat organic low-fat vanilla ice cream.
In other words – boring.
It wasn’t that she didn’t love him anymore. He was a good man and he loved her too. He worked hard at running his construction business and he did what he could around the house and he always paid his share of the bills. Physically, there was no problem either. His cock was still just as hard as ever, he kept himself remarkably fit and she knew damn well that there wasn’t anyone else that Jim would rather be fucking than her.
It had just all got so goddamn routine.
Every night she’d come home from work and he’d be in the kitchen getting supper ready. It hadn’t always been that way but the last three years he had been able to run his business from home about half of the week – so he gladly took on some of the housekeeping duties.
Jim certainly was a hell of a cook – there was no two ways about that. They would eat their supper in front of the television. If the television was any good they might sit up until eleven and then head for bed.
To bed – to sleep.
That was hard, right off the bat. I mean – how could you get excited about your sex life if you had allowed yourself to get into the habit of waiting for Jeff Probst to give you permission to go to bed and have sex.
It usually worked this way.
Every Friday night after supper Jim would lean over across the couch and he would clumsily kiss her on the lips. She would kiss him back – because that’s what was expected of her – and then they’d walk upstairs to have sex.
A few times Jim had tried to talk her into having sex on the couch – but she couldn’t quite wrap her head around the idea that the couch was still being paid for – and she wasn’t about to mess it up by attempting a reverse cowgirl maneuver.
More than once Jim had hinted that it might be a good idea if they forgot about television and maybe plugged a pornographic DVD into the player and watched “a little of the hot stuff”, as he liked to call it.
Jim had ALWAYS liked his porno flicks. Amber had gone along with it at first but as the years went by she told him that she actually thought that pornographic films were a little on the trashy side – as far as she was concerned.
It wasn’t that she was a prude, you understand. Amber had just never learned to be quite so demonstrative in her sex-play.
She wasn’t a slouch either.