You are here: Products Eyes in the Dark by Rowena Dawn 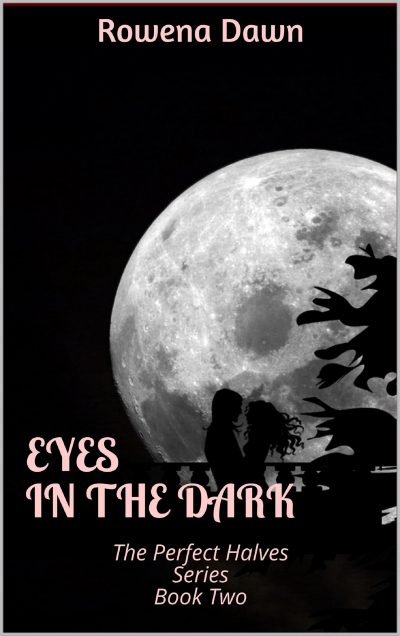 Eyes in the Dark by Rowena Dawn

She looks for peace of mind. He looks for revenge. They both get what they want but with a twist.
Diane’s an artist and a city girl. She inherits her aunt’s ranch house and land and moves there in a journey to rediscover herself. But first, she discovers her inheritance comes with strings attached and people are willing to kill over it.
Adam, former soldier and mercenary, wants to avenge his brother’s death. Diane is his only means to achieve his purpose. Or that’s what he thinks. When things get bad – and they do, Adam finds out that some people just sneak into one’s soul and haunt them for eternity.
Eyes in the Dark is the stand-alone second book in the Perfect Halves Series. Another tough guy hits the ground. If you like suspense and romance, then this is the book for you. Strong characters and suspense are waiting to fill in your afternoons.

Rowena Dawn writes romance, reads thrillers and watches comedies. She likes walking through the woods but insanely loves the sea. She has a love – hate relationship with her writing and drives her dog crazy whenever she doesn't stop writing to take him out. And yes, she bakes, bread and cakes. Apparently good ones – they're always in demand.

Suddenly, the man decided he’d watched his fill. “Show time,” he said under his breath and stepped out from his hiding place.
“Hey, you over there!”
She almost jumped when the rough voice whipped through the air. It came from the left side of the yard where lots of bushes and tall trees darkened the night even more. She glimpsed a tall shadow moving in the dark and a sparkle of fear seized her breath.
The man closed the distance be-tween them, a grin in the corner of his mouth. Something close to satisfaction bubbled in his veins.
Her eyes widened when his tall and broad shape seemed to engulf the space. The fear in her eyes stirred an unknown emotion deep inside him. He tried to label it, but came out emp-ty.
He ruled out compassion alt-hough he couldn’t explain why. It wasn’t as if he even remembered how compassion felt.
For a few tense moments, they stared at each other intensely. Neither one moved.
Fear flickered in her green eyes again. A huge male was striding through her yard as if he’d owned the damn place.
His steely black eyes reflected his innate boldness, laced with a hint of amusement and a feral sliver of uni-dentified hunger. That hunger trou-bled her. She didn’t care about his amusement or anything else.
They assessed each other like two swordsmen.
Why the heck didn’t I listen to my in-stincts? She’d thought herself alone out there at the small ranch house, yet, all evening, she felt someone was watch-ing her. The sensation had electrified the fine hair at the nape of her neck but she’d foolishly dismissed it.
The ranch was far from any crowded roads. She didn’t need le-gions of people around and she didn’t miss the noises of a big city.
Since the death of her aunt, a few months before, she’d been thinking of moving out of town and making a life for herself there, in the middle of no-where. A week ago, she’d finally done it. Now, she doubted she’d made the right decision.
“I’ve got a gun, right here,” she shouted to him. Her voice shook. “And I know how to use it,” she con-tinued in a shrilling voice. Fear almost smothered her.
His brash laughter reached her ears and her blood ran cold. He doesn’t believe me, she thought with a shock and, for a fleeting moment, she regret-ted she hadn’t taken those self-defense classes she’d been thinking about back then when she was living in the city. Well, too bad. It’s too late to cry over spilled milk now. Time to face the music.
“Yeah, I bet you do!” he hollered back, laughing louder. “Sweetheart,” he drawled, and honey dripped off his lips, betraying a specific southern ac-cent, “I’m sure you could darn shoot me if you wanted to. But I doubt you do,” he continued and lifted an eye-brow, as if he’d dared her. “I just want help for one night, maybe two, tops,” he lied through his teeth.
His fake sweet voice made her fear step aside. Anger took its place and climbed up to her lips at his bit-ing sarcasm.
“Town’s in that direction,” she re-plied, pointing to his left. “There, you can find all the help you want, mister,” she added in clipped words. “There’s nothing here for you,” she clarified with a sharp gesture.
“I don’t feel like going into town right now,” he shrugged. “I’m tired. I’ve been walking long enough. My car broke down a few miles back down that road, and I need a place to stay. I think I like this one,” he said in a flat voice, which brought shivers up her spine.
Then, he came closer and under the spot of light from the veranda.