You are here: Products Eye of the Storms: The Rock Stars Gulf Coast Girl by Lisa Gillis 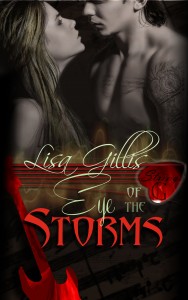 Eye of the Storms: The Rock Stars Gulf Coast Girl by Lisa Gillis

Is the cure for a breakup a hookup?

Marissa Duplei has one mission. Pick herself up, dust the ex off, and get dirty with someone else. However, sexy, inked-up, metal-musician Jack Storm is not the average girl’s revenge fling.

A one night stand gone awry.

A secret to keep at all costs.

Could it all lead to love?

When she is not writing those little voices out of her head while listening to music, she’s making her own noise on drums or guitar.

Living in the entertainment industry I have a firsthand look at what colorful characters–literally and figuratively–rock stars are.

Taking my glass, he thrust both drinks aside, and his palms came to rest on my hips to pull me close. The hand snaking so familiarly under my shirt was cold from holding his drink, but it quickly warmed against the heat of my skin. Greedily, I couldn’t get enough of his kiss, and I found myself practically hanging on him in an effort to get even closer.
His hand splayed on my back, smashing our bodies together. Phase two was all downhill from here, or rather down the hall. As I thought of my bedroom, some sanity returned. Five years ago, we had hooked up for the sake of hooking up. And tonight? Tonight I had phased sex into some devious plan. A plan that, not for the first time, felt weird and wrong.
“Jack?” I wedged a hand between us, and when he pulled back enough to warm my face with his inquiring gaze, I pulled in a fortifying breath. “You’re not seeing anyone?”
A myriad of emotions crossed his face, and one seemed to be annoyance. “I thought we just cleared this?”
An awkward silence stretched, and he still seemed exasperated with this line of questioning or maybe with the interruption.
And so I joked, “I’ve heard about rock stars. A woman in every city! I just don’t want to be your gulf coast girl.”
“What are you asking, Marissa?”
Oh hell… What was I asking? Was I trying to define our relationship, right here, right now? Because what faster way to scare away someone like him? I was an idiot!
“I’m not asking anything,” I tried to salvage a shred of humility. “I just don’t want to go where this is going if you have a girlfriend. It’s wrong.”
Picking up his glass, he drained it. I had definitely killed the mood, and I was regretting it now. I was about to drink to my own stupidity when he dropped to my level again, speaking against my lips.
“I’m not seeing anyone. No woman in any city. No one.” His lips brushed mine as he spoke, and his gaze sank into my eyes. “Is there anything else you need to clear up in this kitchen before we move to the bedroom and fuck like it’s been five years since?”
Hypnotized by his words, and heated with his look, I could only shake my head in one small chin movement.
“Anything you want me to sign?” He pressed, as he pressed a kiss to my mouth, and when I smiled at the humor, he did too.
A touch of our tongues had us heating up fast, and within seconds, the past minutes fell away as if I had never cock-blocked myself.

Be the first to review “Eye of the Storms: The Rock Stars Gulf Coast Girl by Lisa Gillis” Cancel reply