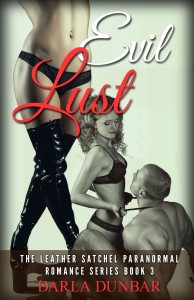 Henry and Claire are meant to be together. But a succubus has taken over Henry’s actions.

Under her spell, Henry has succumbed to lusting after Charlotte, the human form that the succubus has assumed. If Claire were to find out, their marriage will be ruined beyond repair.

It is up to Valtina to break the succubus’ spell and clear Henry’s memory of any guilt that would haunt his love for Claire forever.

Download the book to find out what surprises Valtina carries in her leather satchel to help her prevent a major marital catastrophe.

He picked her up and carried her to the couch. “Here is good for now,” he mumbled as he nibbled and sucked at her exposed nipples. “I’m going to make love to you all night,” Henry promised. “I’m going to lick, and kiss, and enjoy every inch of your body.” He moved his lips to her stomach and kissed her through the nylon. Claire arched towards him and guided his hands back to her breasts. “But first Claire, first I’m going to take you, right here. I have to have you. I have to have you,” he moaned as he rubbed his stiff, throbbing cock against the cool, silky nylon.

I really like paranormal events and when you combine sex and alpha and para it just gets so exciting. I really want my stories to be erotica but more. I write to fulfill my own imaginings and I get quite a bit of satisfaction from sharing my stories with everyone.