You are here: Products Everything More by Arabelle Stevens 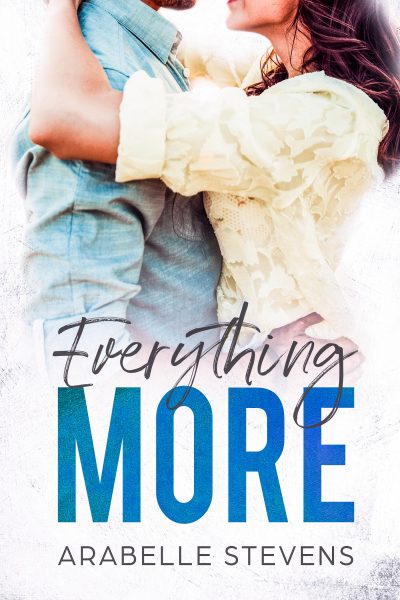 Everything More by Arabelle Stevens

Marie Benedict had the world as her oyster. A wealthy husband, whirlwinding her around the world, making wild love in every corner of the globe. When it all fell apart, she never dreamed she’d find love again with a man twenty years her junior, and that he would give her everything she ever wanted in life . . . and more.

Arabelle Stevens lives in Maine with her husband, their Mastiff's, cat, and chickens. Her background, other than writing, is as a criminal paralegal. She has retired from that latter life and now when she isn't writing, she stays busy with her husband on their mini-homestead in Maine, in the town where she grew up. She feels very strongly about the arts and is heavily involved with encouraging new writers with public speaking, workshops, and a great deal of personal email advice. To her, it's not about competition; it's about the love of the art of writing. There's plenty of work for everyone to be successful. She loves hearing from her fans and tries to personally respond to each contact, sometimes easier said than done.

I've been writing most of my life. People and challenging situations fascinate me. This was no exception. Even in today's society, non-traditional relationships have their challenges. I wanted to write about that.

Marie Gilman sat with a group of her friends in a posh nightclub in Uptown Manhattan on a warm Saturday night. She was a twenty-eight-year old brunette beauty with an athletic physique. And she knew it. She wasn’t vain, she just knew the package that she was. She was intelligent, educated, attractive, and enjoyed playing the field.
Mr. Right hadn’t come along, but she wasn’t in a hurry. The world was her oyster at this moment in her life.
“Marie, are you going to dance at all tonight?”
“No, I don’t think so, Sonja. I’m kind of enjoying the people-watching tonight. Interesting crowd. Where’s our server? I’m going to get another drink. Need anything?”
“Sure. Another one of . . . whatever this is I’m drinking.” Marie laughed.
“Okay, be right back.”
She went up to the bar, sashaying past groups of tightly packed people. The bar was so crowded that she couldn’t help but touch other patrons of the bar as she passed.
“What can I get you?” Asked the bartender.
“Two white wines, please.”
“You got it.”
“Thanks.” She turned her back to the bar to watch the crowd as she waited. Interesting crowd indeed. All the beautiful people were out tonight.
“What’s a gorgeous woman like you getting her own drinks for?” The man next to her asked.
“Excuse me?” She smiled coyly.
“Forgive me. I couldn’t help notice that you’re getting your own drinks. Not very gentlemanly of your date.”
She looked over at the man next to her. He was gorgeous. Not a hair out of place, dark, deep eyes, and shirt unbuttoned just enough to reveal a sexy tuft of chest hair. Her heart skipped a beat and her stomach fluttered.
“I’d agree with you, if I were here with a date.” The man’s face lit up.
“Oh really? This conversation just got interesting. Would you like a date?” She smiled.
“Maybe.” She turned to face him full-on.
“My name’s Douglas. Douglas Benedict.”
“I’m Marie Gilman.”
“Nice to meet you, Marie Gilman. Here’s to you.” As he lifted his drink to toast her.
For the next two years, Douglas and Marie were practically inseparable and the sex was voracious and adventurous.
“Marie, I need to ask you something.”
“Don’t stop. Ask me anything. Just don’t stop.” She panted, almost at her climax. “Harder. Oh my God, harder. Faster.” Douglas grunted as he complied.
“Oh my God, you’re so perfect.” As he thrust even harder. “I want this forever. I don’t ever want to be without you.” They both were grunting and moaning like animals as their climax began it’s ascent. “Marry me. Marry me right away.”
They both moaned and screamed as the violent thrusting and rotating smashing against each other came to a head. They laid still, but panting and sweating, he on top of her for what felt like an hour.
“Did you hear me?”
“I heard you.”
“What’s your answer? I can give you a life you’ve never even dreamed of. We’ll travel the world, together, and then . . .” he kissed and licked her neck. “And then, we can find a nice little town. Settle down. Make some babies,” as he licked between her full breasts. “What do ya say? You and me taking on the world. Doing this every day. How ‘bout it?” She smiled and wrapped her leg over him.
“I say, yes. I’ll marry you.”

CHAPTER TWO
For nine years, the sexy couple traveled the corners of the world, making love all over the globe. It was a life of dreams. Eventually, it was time to wake up.
“I’ve been thinking, Marie.”
“Uh oh. That’s never good.”
“I think it’s time to go home.” Marie looked across the bed at Douglas. Strange that he’d verbalize exactly what she was also thinking.
“Funny you say that. I’ve been daydreaming about white picket fences and a quaint little Cape on the coast.”
“And babies.”
“Yes. Cribs, strollers, all of it.”
“So you agree?”
“I do. Have you thought about a town?”
“Not New York again. That’s not where I want our kids to grow up. I want them in a small town, a community. A place where everyone watches out for each other. No one’s a stranger.”
“Sounds perfect.”
Sheffield Shores in Massachusetts quickly moved to the top of their list. It was everything they were both looking for.
The house hunting was fun and painless. They found the exact white Cape that Marie had dreamed of on a quiet side street. And, yes, even with a white picket fence.
Douglas easily stepped right back into his career as one of New York’s finest bankers and Marie renewed her teaching license and went to work at the local Middle School, teaching sixth and seventh grade Social Studies.
And they waited to get pregnant.
And they waited.
Months went by and, eventually, they were into their second year of trying. Marie was still not pregnant.
She monitored her cycle daily, changed her diet, tried medications, and practiced every sex position under the sun.
She brought up in vitro fertilization one time after a discussion with her doctor, but Douglas wasn’t open to that route. He was old-fashioned, set in his ways, and had a staunch belief in having a child the traditional method, he had no interest in becoming a science experiment.
He was nearly a decade older than Marie so he was pushing fifty. As an only child who had uncles with no children, he felt a strong responsibility to carry on his bloodline and family name. The pressure was on him.
Marie and Douglas’s happy home began slipping away. Fighting and bickering became constant, sex became passionless, and the two spent little to no quality time together.
During one turbulent argument, Marie pleaded with Douglas.
“I’m doing everything in my power to help us. Can’t you see that?”
Marie’s pleading became the theme of each and every argument. The boiling point hit when Marie suggested to Douglas that they consider adoption to have a child since they couldn’t get pregnant.
“That is not an option, Marie! My family name ends with me if I don’t have a child. Don’t you get it?” Douglas screamed at Marie. “An adoption agency? No way! If you can’t give me a child, I guess our days are numbered,” he said, as he slammed the bedroom door shut.
Tears streamed down Marie’s face as her once heavenly marriage was on its last leg. For the last few months of her marriage to Douglas, Marie hoped and prayed he would come around, but he only shunned her.
It came as no surprise the day Douglas formerly asked her for a divorce.
“I can’t wait any longer, Marie. I need to have a child now and you can’t seem to provide that for me,” he scowled at her.
“What happened to you? What happened to us? Don’t you love me anymore?” Marie pleaded as Douglas edged closer to the door.
“We’ve had fun times, but this turmoil has been too much. It’s time for a change,” he sighed at her.
Douglas left with his bags in his hands and gave Marie one final goodbye as he walked out the door and her life, forever.