You are here: Products Every Woman Deserves an Accessory by Von Powell 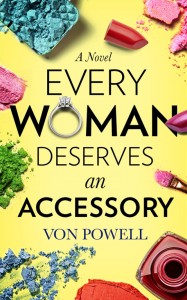 Every Woman Deserves an Accessory by Von Powell

When Raquel Davis, a successful, but jaded makeup artist first heard about personal trainer Javier Vasquez, she wasn’t interested. Her marriage was crumbling and her friendships were becoming destructive. Overweight and lacking confidence, Raquel wasn’t ready or interested in meeting anyone new.

Fast forward five years. Raquel is eighty pounds slimmer with much more confidence in herself. She has ended her marriage and traded in the flash of a diamond ring for the flashbulbs of the red carpet. But, despite all her material and career success, she wants something more.

Raquel has survived heartbreak, handled single motherhood, and thrived in the world of fashion, but will she allow herself to take a chance on love again? Although she is now use to wearing diamonds only on her ears, perhaps Javier will be able to show Raquel an accessory or two that she’s been missing.

How did this high school teacher turn into a steamy book author? Well, honestly Von Powell has always been a writer; who recently started teaching. Growing up as an only child on Chicago’s south side encouraged Von to use his creativity to have fun when it was too snowy and cold to go outside or too hot and violent to play with his friends. Thus, as a child to keep himself occupied, he would draw pictures and create short stories to go with them. Encouraged by his teachers, Von decided that maybe one day after he finished law school, it would be a good time to write. However, when the time came for Von to attend law school, he deferred his offers and committed to serving for two years as a Teach For America Corp member. While teaching, Von realized just how much he loved to connect with people’s emotions and admittedly saw writing as a way to impact more lives. Von confesses that “not attending law school was one of the hardest decisions that I’ve had to make.” Von turned down offers to attend law school in order to, “give back to others, especially young men who look like me and come from similar backgrounds.” The national education program, Teach For America, allowed Von the forum for him to make it happen. Ultimately, serving others was one of the best decisions Von could have made for himself as he smiles and says, “Working with my students inspired me to do what I love and follow my dreams. They’re a huge support system.”

Some life experiences and a vivid imagination.

They sat with their drinks near the back of the coffee shop. For her a latte, and straight black coffee for Javier.
“So how’d you get into the business of makeup? Was this what you always wanted?” Javier asked.
She smiled. He possessed a certain innate charisma.
“Business?” she asked narrowing her eyes. “Impressive that you view my line of work that way. Most see it as me playing dress up.”
They shared a small laugh accompanied with coy stares from her and a more earnest stare from him. He was waiting for a real reply to his question, not some sly remark. She sipped her coffee while trying not to fall too deeply for the smell of his cologne.
“Uh, I grew up knowing that I didn’t want a traditional work life.” Raquel tucked her hair behind her ears and tugged on the bill of her hat. “I wanted to be able to travel and make enough money to sustain myself all while doing what I love.”
He stared at her with reassuring eyes. He was actually listening to her. His focus was distracting and caught her completely off guard. Raquel knew how to respond to a man ogling her breasts, thighs, or her ample ass. But this was new ground.
“So how is that working out for you?” He leaned back in his chair to stretch. The bottom of his shirt lifted as he swung his arms above his head and took in a deep breath. He was unabashed by his slightly exposed abdominal hair and what looked to be the beginnings of a six pack. Raquel tilted her neck and rubbed the back of it. He pulled his shirt down and she caught herself and sat up straight.
“Yeah, it’s working out just fine. Thank God,” she responded.
He considered her for a moment before replying, “No judgment, but your ‘Thank God’ didn’t sound like praise; more like a plea if that makes sense.”
She set her drink down. “I wasn’t certain how far makeup would take me. I toyed with the idea of being a lawyer after college because it seemed like a natural progression.” Raquel recounted her undergraduate days of wanting to be a civil rights attorney who did her clients’ makeup. That was how she planned to reconcile her passionate, analytical, yet highly creative mind. But that dream never materialized.
She picked up her latte again, “I had to be honest with myself. Law sounded great but it wasn’t my true passion. This, is.” Javier stared at her and his stare made her feel exposed and vulnerable. She sipped her latte and thought of his cologne.
It was subtle, yet strong enough for her to catch hints of citrus, sandalwood, and geranium. Masculine, yet not overly powerful. It reminded Raquel of how she had first perceived him: refined yet confident.
“Hearing your success story gives me inspiration.” He flashed his smile. “I thought about being a lawyer too. But I was never good at lying.”
Raquel coughed. I’ll be the judge of that, she thought.
“Plus, I love what I do,” he said flexing his biceps as he rubbed his fingers through his hair, still wet from his post-workout shower.
He confessed, “I love helping people and personal training helps people in a really huge way.”
“Indeed it does,” she replied. She eyed him, feeling like a star-struck teenager having coffee with the most famous man on earth.
“You looking forward to some workout sessions?” Javier asked.
Nervously she smiled, “Yeah, kinda.”
“Why do you seem nervous?” He leaned forward and gazed at her face like it was a full moon.
“I’ve never really worked out with anyone besides my girls a couple of times.”
“So this will all be new to you?”
“Exactly,” she replied as she watched him lean back, scratch his stomach, and laugh. Her eyebrows arched, “Why are you laughing?”
Javier replied, “Cause’ you have no reason to be nervous.” Then, after a pause, he really looked at her. “You’ll enjoy everything we do.”
Raquel gulped and returned to rubbing her neck.
“I’ll give you a call and we’ll set up our first session. We’ll start talking about goals and all that when I see you again.”
“Sounds good,” she wished that she had ordered water with her latte because she was feeling really warm inside. Raquel thought only water could quench her thirst.
As they stood to say their goodbyes, he hovered over her and reached down smoothly to hug the sensitive skin between her butt and lower back. Javier was firm, but respectful. Before she even had an adequate amount of time to process his embrace, he had kissed her on her cheek and grabbed her hand. He escorted Raquel outside of the shop. He hailed a taxi for her, waited until she got in, and secured her seatbelt over her shoulder.
“Good meeting with you today.” He whispered.
She nodded her head in silent agreement.
Javier said, “Finally got to put a face to the name Mariabelle’s been bragging about for so long.”
Javier winked at Raquel as she started to blush.
He teased, “How many years has it been since she told you about me? Five?”
“Look,” Raquel tried to explain, but Javier silenced her by bringing a finger to his lips.
“No need,” Javier said, tapping the side of the cab door.
Raquel smiled, flushed with relief, and happy with hearing that Mariabelle had been bragging about her.
“I’ll see you soon,” she murmured with her eyelashes fluttering. He shut the door and waved as the cab pulled away. She slid down in her seat, exhaling, wondering what she’d just gotten herself into.