You are here: Products Ethereal Protector by Angelica Dawson 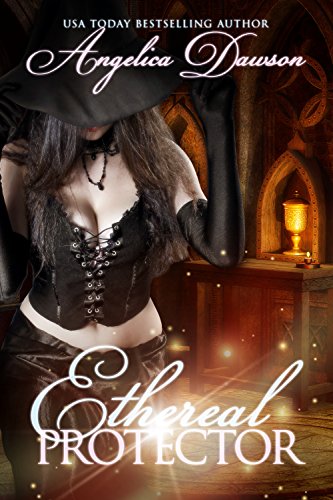 Summer Parker has moved to Salem, into her great-grandmother’s house. Once there, she is plagued by the sensation of someone watching her. Added to that, she is having strange dreams about her ancestor, Mary Parker, who was one of Salem’s witches. Her human roommates remove most of the eeriness of her predicament, but the intangible roomie is making himself at home too. After a close call, the identity of her resident ghost is revealed. But if Geoffrey is the ghost, does that make her Mary Parker? One thing is certain, Geoffrey is as determined to protect her.

Angelica Dawson, USA Today best selling Naughty Nights Press author, has been writing for several years and having sex a lot longer than that. Angelica is a wife, mother and environmental consultant. Her love of plants and the outdoors is not diminished by the bloodsucking hoards — mosquitoes and black flies, not vampires.

I had the idea of a girl reliving her past life and Geoffrey, the ghost, popped along for the ride. Then I saw her roommates as a coven, and now it's a series!

Summer stepped off the train and extended the handle on her hard-sided, purple suitcase. Washington Street stretched out before her and she adjusted the vinyl hood of her black rain slicker. It was only drizzling, but she had a bit of a hike ahead of her. Taking a deep breath, she stepped off the sidewalk and into the street.
A horn blared immediately and she stopped, startled, unsure what she’d done wrong.
“Watch where you’re going, you dumb broad.” The shout wasn’t in her direction but at a car trying to make its way into the station parking area. Squaring her shoulders, Summer set off again.
She met the eye of people driving and walking, although most looked away. Eventually, she did the same, feeling further away from home than ever. She picked up her pace, wanting to save her belongings from the rain that would inevitably soak through the zippers. Hopefully, Great Grandmother’s house would be more welcoming.
It was several blocks and took her half an hour to reach, but relief led her to stand straighter as she slid the key into 4 Holly Street.
“I’m home.” The house echoed her. She pulled her luggage in and closed the door, leaving it at the entrance. She tugged off her wet boots and left them and her tote bag there as well. Time to check the place out.
The home had been rented off and on over the years, when there wasn’t a Parker to live in it. Her acceptance to Salem State University’s School of Social Work had come just as their property manager was listing it to rent out again. Two other girls would make their way here over the week.
Although classic, the house had been maintained and renovated over the years, so it looked quaint, but had central heating, hot water on demand, and proper outlets in all the walls. There was even an Ethernet outlet in the sitting room under an old writing desk that had been converted for a keyboard tray and monitor.
“Sweet.” Summer ran her hand over the warm brown wood, polished to shine. She had opted not to keep the cleaners, saving a few pennies by keeping house herself. It wasn’t an option to normal renters. The cleaning crew could alert the management company of problem tenants before much damage could be done.
Summer shivered with a chill that was likely the result of rain water. Her hair, where it had escaped her hood, dripped. She shrugged off the slicker and left it with the boots, then took her tote and suitcase up the stairs. Creaks accompanied her climbing, and that sound echoed as well. She would have to set up a portable stereo or something. The place was too creepy with no one in it. There were four bedrooms in total—two tiny, one fairly large and a master suite, which she claimed.
She snorted at the thought. It had a sink attached. Not even a toilet. Not really a suite. It was the largest bedroom, though, and would give her somewhere to brush her teeth and fix her hair once her roommates arrived.
Flopping on the bed, she looked up at the plaster ceiling and saw a myriad of tiny cracks. Was that a bad thing? Would pieces of it start falling on her? Standing on the duvet in damp socks, she stretched to see it better.
“Ew.” They weren’t cracks but strings of cobwebs, tons of them. She couldn’t reach, but she would be back with a broom before sleeping. And she might not be able to sleep even then.
She would head out for food—eat out tonight or get groceries for tomorrow—but there was one more thing to do before that. Her tablet rested in her tote bag, and she sent a message to Mom, Aunt Marge, and Della, her best friend from Montreal. They would all want to know that she arrived safely, that the house was in great shape—she didn’t mention the cobwebs, the cleaners hadn’t been in since the last renter left—and she was excited to start class in a couple of days.
Formalities done, she looked out the window into the grey September evening and considered ordering in pizza. It made more sense to get groceries, though. After all, she would need breakfast as well. Judging the rain, she wondered if it was worth waiting for it to pass.
She spun around, the overwhelming sense of someone watching her coming from the closet. That made no sense. She opened the doors wide, revealing a bare bar with several hangers that rattled as air swept out.
Leaning in, Summer looked left and right, examining the corners. Maybe it was a mouse. Nope.
She hopped down the stairs and put on her jacket. Suddenly groceries and rain seemed better than staying where she was. Had Aunt Marge said anything about high turnover, or infestations, or anything? She set a quick pace and tried to recall, but nothing came to mind. The turnover was high, but that was just because students only stayed for a few years. Still, she would email Marge tonight.
When she returned with the groceries, her arms aching slightly from the weight of them, the eerie feeling was gone. Relieved, she took her time putting away milk, bread, cereal, and everything else. The deli sandwich came last and she took her time eating it.
Climbing the stairs, she yawned. It had been a long trip and she hoped for a less grey day tomorrow.
When she was curling up in bed, the sensation of being watched returned. “Who’s there?” she asked, feeling stupid. Who was going to answer her?
There was no reply, but her bedroom door squeaked on its hinge, swinging in slightly. She closed her eyes and told herself it was her imagination. One thing was certain, she would be thrilled when her roommates arrived. This place was too empty, just like the large bed, filled with only herself.

Summer strolled through the woods, plucking flowers and leaves. She plopped them into her basket, next to a folded blanket. When covering her harvest, it looked like she was gathering strawberries, the only fruit out this early. She worried less now that she had an acceptable purpose. No one seemed to understand why she collected the inner back of hazels and willows, why she cut hellebore and mint and chamomile. Most thought she was up to something nefarious, something demonic. It couldn’t be less ethereal, rather it was intimately earthy.
After bringing her harvest home, she set her basket on her counter and began to boil water. Her drying racks came out next and she spread out her haul for preparation.
Her door burst open and she jumped, a handful of bark falling into the boiling water. Damn, she’d wanted to add that slowly.
“Mary, help me.”
Summer hurried to the man carrying his son. It didn’t occur to her that he’d called her by another name. “Here,” she said, pulling a trundle out from under table. Charles set his son, Geoffrey, down on the hard surface. She would have to get him moved once she’d finished her examination.
“This is the same sickness?” she asked, peeling back one of Geoffrey’s eyelids to peer into his eyes. They were bloodshot, but otherwise normal.
“Yes, this infernal disease doesn’t want to leave him. He fell down again.”
Summer nodded. “Take him to my bed,” she said when she’d finished checking him over.
Charles picked the sick boy up. He wasn’t a boy so much as a young man, and his father grunted under the weight. Summer cleared the way and then closed the bedroom door on her patient.
“How can I pay you?” Charles asked.
Summer waved him off. “Don’t talk about that. Just keep this quiet, very quiet.” There had been whispers around town and the last thing she needed was to be connected to witches.
“Of course. I won’t mention it again. Let me know if there is anything you need.”
Summer looked over her kitchen. “Cloth. I need linens.”
Charles smiled and his shoulders dropped. She expected he felt relieved to have something to offer her. “I will get you yards of it. Thank you, Mary.”
“Now shoo. I don’t want any rumors about you in my house.” Infidelity was less violently punished than consorting with the Devil, but by a slim margin.
The boy groaned as Summer stirred her boiling water. Cup in hand, she scooped up tea, and then whispered prayers over it, infusing it with her own soul. “Here, Geoffrey. Drink and sleep.”