You are here: Products Escape to Osprey Cove by Luisa Marietta Gold 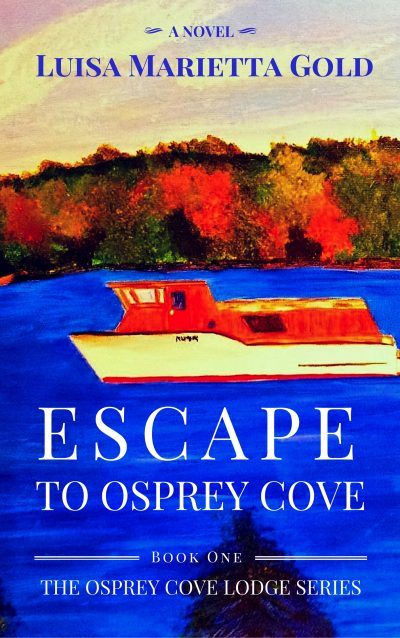 The mystery begins with an unusual find in the secret compartment of Doug’s new Corvette. It will change his and Catherine’s life forever, forcing her to find escape at The Osprey Cove Lodge.

Luisa Marietta Gold was born in Pennsylvania where she spent a large part of her adult life. She moved to North Carolina after the birth of her only daughter. She published her debut novel, Escape to Osprey Cove, which is Book 1 of The Osprey Cove Lodge series in September 2016. The Osprey Cove Series was born from Luisa's love of the Rideau Lake region of Canada, the outdoors, and lake life. She spent many years enjoying the Rideau region while staying in lodges reminiscent of the lodge in her first novel. She currently resides on eleven acres in her North Carolina home near an idyllic lake with her husband and several mixed labs. She spends as much time as possible enjoying the beauty of the lake. Luisa also does acrylic painting. The cover of her debut book which features The Lady Droxell on a Canadian lake was painted by her. It was very satisfying to Luisa to know that she created the entire project. There is a tea room not far from her home where one selects a hat to wear while dining as did Libby and Rosalind in the book. And sometimes they are silly. Luisa's bio picture was taken there.

The setting for this book, The Rideau region of Ontario, Canada, has a special meaning for me. I have attempted in the book to share its beauty with others.

It appeared to Catherine as though she had just approached Mr. Darcy’s Pemberly in all its magnificence. Now she knew how Elizabeth felt at her first sighting of Pemberly. But unlike Elizabeth, Catherine thought, there would be no happy ending. This would not become her home one day, as Pemberly had become Elizabeth’s, and live happily ever after. Catherine did not covet the house that lay before her. In fact, Catherine was wealthy enough to buy a home like it if she so desired. What Catherine did long for was what Pemberly represented to all Jane Austen lovers — the culmination of a beautiful love affair. Catherine was not naive enough to expect her life to be storybook in nature. But she did not expect her life with Doug to disintegrate into shambles just two years after marrying him. She did not understand why it was happening. She did not know how to fix it.