You are here: Products Eriq: A Shadow, Inc. Novella by Cass Alexander 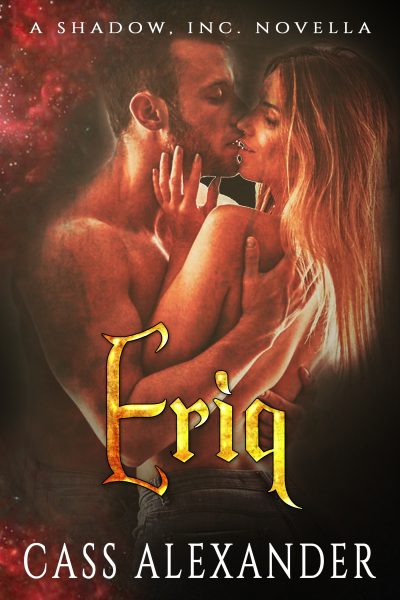 “Now it’s your turn, Kitten. I want you to watch us, pretend it’s you under me.”

Eriq Marcellus is good at his job. As House Dom at the East Coast’s premier sex club, he trains immortals for their new roles, to ensure they know the ins and outs of everything the club has to offer. With his employees, he is compassionate, protective, and everything a good Dom should be. He loves all the perks that come with his position. The last thing he wants is to be tied down.

While on vacation in Barbados, he meets Sofia, the beautiful daughter of an acquaintance. He tries to stay away, but Sofia’s draw is too powerful. He wants to keep her, but he doesn’t know the meaning of the word monogamy. When he pulls inexperienced Sofia into his world, he is surprised by her willingness to explore the carnal side of life. She might be fine with sharing him, but Eriq’s no longer sure he can allow someone else to bring her pleasure.

Eriq is the third book of the Shadow, Inc. Series. Each book is a standalone novella.

Cass Alexander is the pen name of a Southern born and bred public school teacher. Her brother, who insists she address him as, The Prince of Darkness, gave her the nom de plume after warning Cass that her book’s content may scar her sons for life.

Cass’s mission in life is to spread the love and the laughter, goodness knows it’s needed. It’s why she writes.

One night, after reading one of The Fae Chronicles' books, I got an idea. Three days later, I had the first book in this series finished. I quickly wrote two more. They're quick and dirty, and I loved writing them.

“Tell me you’ve done this before, Sofia.”

She removed her tongue from the salty skin of Eriq’s neck, wondering why he’d ask such a question. Most virgins didn’t give it up against stone walls, outdoors, in the middle of the night, to someone they barely knew. Did he think her an innocent?

Eriq currently had her pinned with his large frame, her dress shoved up to her waist, and her legs wrapped around his hips.

Her panties had been obliterated earlier when he decided she needed to come on his face first.
He’d been right. It was the best oral she’d ever received. It had set her entire body aflame, had sealed the deal she’d allow him to do pretty much anything he wanted.

Hot air from his mouth puffed across her cheek. Sofia reached for his lips with her own, but he turned away.

“I meant with no-strings. Just one night. Have you … is this okay?”

Sofia rolled her eyes at the assumption she needed a commitment in order to fuck him. How patronizing; how very godsdamned medieval and sexist. Did he know what century it was?

She’d seen him take others up to his room this week. She very much doubted he asked any of those sexual partners if they were cool with a no-strings lay.

Sofia was realistic. She knew he was here in Barbados on vacation, staying at the luxury resort her father owned and operated. He wasn’t someone to whom she should become attached.

Did Eriq think she believed one night between her legs would mean something to her? Aside from feeding her physical desires?

She was never fully satisfied and constantly looking for someone who could give her what she needed. She’d thought Eriq would be the one to show here what sex should be like.

As hot as he was, and as lascivious as he made her feel with just a look, she was under no illusion he was here to whisk her away to be his. Sofia wanted him, but she didn’t like being treated as if she didn’t understand what this was.

Eriq rolled his hips into her center, but Sofia’s annoyance with him had already killed the mood.

Feeling the sudden change in her demeanor, Eriq slowly let Sofia’s body slide down his. It was torture. He wanted inside her, very badly.

He’d wanted her since the moment he first laid eyes on her, dressed in her professional uniform, greeting guests as they arrived. When he’d caught her eye, she’d licked her lips and looked him up and down.

Her dirty blonde hair had been perfectly pinned, not a strand out of place, in total contrast to her mischievous dark-blue eyes. There was a fire raging underneath her perfect appearance; and Eriq wanted to stoke it.

Eriq assumed she was just another employee and knew he’d seduce her into his bed during his visit. That is, until he saw her with her father, Andrei.

Andrei was a powerful daemon and had the respect of most of the immortal world. He was good friends with Amelia, the siren who ran Club Shadow—the high-end sex club Eriq’s family owned.

She’d told Eriq that Andrei fought his entire life to shed the negative image of the nature of daemons as sleazy sycophants. He wanted something better for his children than what he faced growing up.

Eriq knew Andrei from years before and had stayed in several of the daemon’s resorts. He knew Andrei’s only daughter was a source of pride for him.

Andrei often bragged about Sofia, about what a rare jewel she was in a sinful world. She’d sounded a little too straight-laced for Eriq’s more exotic tastes.

Plus, she was young—only in her mid-twenties. Eriq didn’t mess with the young and inexperienced unless he was training them for Club Shadow.

Until this week, Eriq had never laid eyes on Sofia. When he did, she had his full and undivided attention. At least, until he realized who she was.

Upon closer inspection, Sofia’s clothing, her mannerisms, and her words all screamed “good girl.”
She may have been in need of a good … stoking, but Eriq backed off, fulfilling his needs with other guests.
A few days of fun in the sun and he still couldn’t get Sofia off his mind. He’d even resorted to finding a blonde to take to bed in a half-hearted attempt to fulfill his new fantasy.

It didn’t work. Nothing but Sofia would do. So, on his last night here, he’d sought her out, knowing full-well he was risking the wrath of her father.

One stroll on the beach with Sofia and he’d broken. Her smell, her taste, the way she encouraged him, he’d been seconds away from lowering his zipper and plunging into her heat.

He should have kept his big mouth shut, but she looked so innocent in her ponytail and fifties-style dress, he wanted to be sure she was comfortable with what they were doing.

Now she just looked pissed. The corner of his mouth quirked up, but he tamped it down, not wanting to insult her further.

He’d taken to thinking of her as his little blonde kitten. Eriq would need to throw himself into his job at Club Shadow to scrub Sofia from his brain. He barely knew her and was already becoming possessive.

“This was a mistake, Eriq. Thank you for a lovely walk. I’ll see myself inside.”

She turned on her heel and marched to the stairs. It wasn’t easy to walk away, but she did have some degree of pride.

“Wait,” he said, grabbing her arm.

She looked at his hand with contempt and he let go. Damn. Why did he even care? He was leaving tomorrow. She wasn’t the sort of girl he usually spent time with anyway. Eriq should just let it go.

“I’m sorry, Sofia. I was only trying to make sure you were agreeable with what I wanted from you. I didn’t want to offend you.”

She snorted. “I’d think allowing your tongue and fingers inside me had clued you in. But you’re sweet to be concerned. It was nice meeting you, Eriq. If you’ll excuse me, I’m supposed to be meeting someone shortly.”

Sofia continued up the stairs, leaving behind a confused Eriq. He was dumbfounded. She’d walked away from him. Easily. No female had ever walked away, not unless he’d ordered it.

Maybe he was a little too accustomed to being the House Dom at a sex club. He got off on being in charge—it was his job. And he was damned good at his job.

He stood motionless for several minutes, wondering where he’d gone wrong. No, it must not have been him. He had acted gentlemanly. Sort of.

Sofia was inexperienced. That had to be it.

Thinking he’d dodged a bullet, he went up to his room and poured himself a drink. It was the middle of the night, so finding another companion was out of the question.

A flicker of something rolled across his brain. Had Sofia said she was meeting someone? This late? Surely not.
Eriq stepped onto the balcony. Leaning his elbows on the railing, he sipped at his drink, enjoying the view of the moon’s light reflecting off the water.

“Shhh, we have to be quiet,” someone whispered from below.

Eriq leaned over the balcony, listening.

Clothing rustled, lips smacked, chests panted, then moaned. His already hard cock pulsed, wanting what it had been denied.

He smiled. Someone down near the pool was getting lucky. Eriq pressed his palm over his crotch, debating if he should take care of himself now.

The female below sighed. He recognized the sound. It was the sound Sofia made when she came all over his fingers and tongue.

Someone was touching his Koshenya.

Eriq saw red. Before he could stop himself, he teleported to the pool.

Be the first to review “Eriq: A Shadow, Inc. Novella by Cass Alexander” Cancel reply