You are here: Products Envy and Favor by Faye Hall 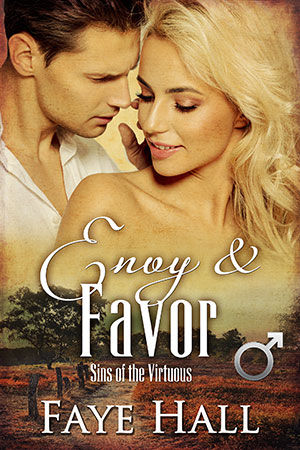 Envy and Favor by Faye Hall

What happens when a resentful man is determined to win the favor of the one you love?

For years Atol Livia has desired only one thing—to move north, far from the corruption of his father’s business, and start a life with the woman he loves. That is if Anna Jenel can look past his poverty and will agree to marry him. When Anna informs him that she gave her heart to him long ago, never once caring about any wealth he might have, he’s elated. But their plans are delayed when Atol’s father is found murdered. Once Atol has finally settled his obligations and is able to leave town, he goes to collect Anna but discovers that she is gone.

Anna doesn’t understand why her father whisked her away in the middle of the night to travel north. When they arrive, she finds a fully operational cattle station, and an associate of her father’s willing to do anything to gain possession of it—even marry her.

When Atol arrives up north, all he can think of is being reunited with Anna. But he soon discovers that the man who murdered his father now has his eyes set on Anna and will do whatever is necessary in order to have her as his wife. This man is determined to gain possession of Anna’s cattle station and the orange sapphires hidden there.

Will Atol and Anna be able to protect each other from a murderer, or will they fall victim to the envy of this man and lose each other forever?

Faye Hall spent her early years listening to stories about the families – including her own – who settled townships in and around her hometown in North Queensland, Australia. The local townspeople, including her own parents, told her stories of corruption and slavery, along with family secrets and forbidden love.

Desperate to remember what she’d been told, along with her already growing love of writing, Faye began to write about the history of her local area. Never could she have imagined the history of her small home town in Australia would become a growing list of published books.

Faye’s passionate stories combine controversial subjects and provocative encounters as her characters struggle to survive the lifestyle in early rural townships throughout Australia. She explores slavery and abortion, drug addiction and murder, as well as forbidden love and passionate affairs of the heart.

When she’s not writing, Faye enjoys sharing a bottle of wine with her husband in their ever-growing garden, and encouraging the varied interests of their combined family of nine children.

Envy & Favor is the sixth book of Sins of the Virtuous, a series created to show a romantic side of the seven deadly sins and virtues.

"Damn it, Anna," Atol cursed. Hurrying to mount his horse, he flicked the reins on its rear and sped off after her.

As he closed the distance between them, he knew he was being a fool running after this woman yet again. He needed to stop dropping everything every time she beckoned him. He needed to, but he couldn't. Anna was everything he could ever want in a woman, and he would follow her to the ends of the earth should she ask him to.

His heart ached as he reminded himself how pointless such a sacrifice would be. Their fathers would never allow any kind of relationship to eventuate between them other than the friendship he had insisted they keep.

It wasn't just her friendship that he wanted though. He wanted… His fingers brushed against his lips, remembering her soft kiss moments before. It was one of only a few he had been blessed with since they'd moved to Rockhampton, but he treasured them all, fearing this was all he would ever be able to share with Anna.

Remembering how easily this most recent show of affection had come about, he again began to wonder if he shouldn't just defy their fathers and confess his true feelings to her. After all, a woman didn't give a man such affections unless she desired—

"Hurry up, Atol," she yelled to him from up ahead, interrupting his thoughts.

Looking in the direction of her voice, he saw her dismounting and tying her horse up before undressing down to her chemise and drawers. Captivated by the image she made, he slowed his horse to a walk and approached the swimming hole.

He dismounted and tied his horse near Anna's, then he slipped off his shoes and removed his shirt, throwing it over a branch of a nearby bottlebrush tree. Strolling toward the bank of the creek, he stalled and rolled up the legs of his jeans before entering the cool water.

"You took your time getting here," she chided him in a playful tone. "I was starting to think you'd changed your mind."

He waded toward her, suddenly forgetting the distance he usually insisted stay between them. "If a beautiful woman asks you to go for a swim, only a fool would refuse."

"Will Father really be mad when he finds out you didn't finish those papers?" she asked.

He shrugged, no longer caring about where he should be right now. All he cared about was this woman and how she was making him feel. "No doubt he will be furious, but I'm certain he'd be more furious to learn where I am with his daughter right now."

She held his gaze. "But we're just swimming. There's nothing wrong with that."

He studied her, unsure if she meant what she was saying. "Surely you know there's nothing so innocent about a man and woman sneaking away to swim. The assumption would be that any man left alone with a woman of your beauty would be unable to control himself."

"Yet you seem to have ample control." She waded toward him, stopping a breath away. "I've invited you to swim with me so many times and never once have you touched me inappropriately."

His hand cupped her cheek, his thumb brushing her lips. "Even you must know every man has their limits."

She leaned into him, her lips touching his briefly before breaking their embrace. "And have I pushed you to yours?"