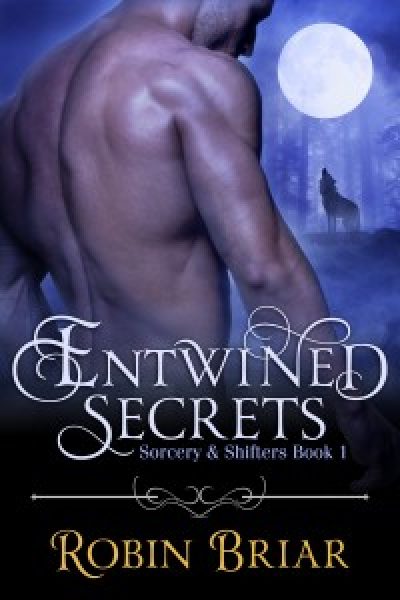 Jess is a sexy, curvy witch hiding out in a small town.

When she meets a refined, gorgeous man named Mason, she’s shocked that her usual charms don’t work on him. He’s still attracted to her, but it’s intensely physical. Jess has never felt a bond so magnetic as the one growing between her and Mason.

What Jess doesn’t know is that Mason is a shifter with an Alpha appetite.

Jess and Mason try to take things slowly, drawing out each other’s secrets over time, but powerful forces are at work. It’s more than just intense sexual attraction. Something else is happening as their witch and wolf fates converge.

The full moon is coming, and soon new identities will emerge.

If their new love can withstand the revelation of their secret dual natures, and if they fight hard to stay together, they might not lose everything.

ENTWINED SECRETS is the first book in the SORCERY & SHIFTERS series. The books of this series should be read in order.

The next in series is ENTWINED DESTINIES by Robin Briar.

Robin Briar, a slave to the paranormal genre, is already writing more about Jess the witch maiden and her supporting cast of werewolves in the ‘Sorcery & Shifters’ series. Robin is assisted by a fussy feline familiar who insists on a tight schedule, so less daylight for the author means more stories for you. Who knew a black & white rescue cat could be so demanding?

The pool of water lay before me, ten feet across, smooth as glass. The others were gathered around me. Two of my three companions were forced into their animal forms, powerless to resist the change. Something in the heart of this alpine valley was affecting them, this strange pool of water.
None of us knew we’d followed the coordinates to a Well of Transformation.
I reached down, curious, one finger extended.
“Be careful, Jess,” warned the only shifter in my group who hadn’t been forced to change. “There’s something unusual about this pool.”
I touched the pool anyways. His caution only made me reach for the water faster. I’d spent my entire life listening to people who did nothing but hold me back. I was recruited by the coven at eighteen, pulled away from a loving family and normal life, given the role of Maiden, and put to work while kept in the dark.
Magic comes easily to me. It always has. That’s why my mentors kept secrets from me. Deep down, I’d always suspected there was a quirk in my nature, some duality that had been hidden from me all these years.
They kept my true nature a secret because they were afraid of the power inside me.
If I’d known, I would have been afraid, too.
I dipped my finger into the pool. The water didn’t feel like water. It wasn’t wet, yet a circle rippled out from my finger.
That was when, one by one, archaic runes ignited beneath the surface and began to glow.
My hand hovered over the pool, now shimmering with light, activated in a way it hadn’t been before. A hush fell over the group. I wanted to reach forward again, touch the illuminated water. It wasn’t simple curiosity anymore. The pool itself seemed to be controlling my actions, urging me to make contact again.
It took all my willpower to jerk my hand back and stand up. I was breathing heavily from the effort. I would have looked around at the others to see if my companions felt the same way, but they’d ceased to exist for me.
It was only Mason’s bark that gave me pause.
He let out one sharp bark, not two. Two was for no, and one was for yes.
Mason couldn’t have known what I was about to do, but he supported me, unlike certain other people in my life. He had become someone I always listened to when he spoke, even if he couldn’t speak with words. So I paused long enough to look up and make eye contact with him.
Warm brown eyes gazed back at me. Even in his wolf form, his humanity shone through.
He was the first man I’d ever loved, and I’d fallen for him because, for once, I hadn’t pretended to be somebody else. Once all the secrets were known, and even beforehand, it was honesty that set me free and allowed me to experience his love. I didn’t know what the Well of Transformation was, or what it would do to me, but it felt real, like knowledge, like everything I’d been searching for without realizing it.
That’s why it was Mason whom I locked eyes with at the end. He was fighting his own war, but still completely focused on me. I was so full of love for him in that moment.
“Jess, don’t do it!”
Another warning from the shifter who could still speak. The words fell on deaf ears. I paused just long enough to smile at Mason, and then took that final step into the well.
My foot slipped through the surface, and although the water appeared to be only inches deep, it swallowed me whole. My leg, and then the rest of me.
I plunged down into darkness, into fire, nothingness, and truth.
I plunged into pain. So much pain.
My body tore apart, because it had to at that point. A necessary step in any transformation. I was about to become the creature I am today.