You are here: Products Enticed by the Gargoyle by Lisa Carlisle 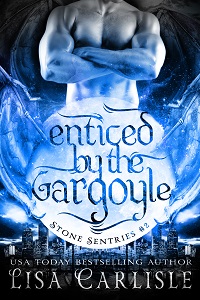 Enticed by the Gargoyle by Lisa Carlisle

Are the demons truly gone?

The gargoyles remain on watch.

And her friend is trapped in an incubus-induced coma.

Larissa, a Boston police officer, encountered the red-winged monsters during their rampage. The chaotic aftermath prevents rest any time soon. And a question remains unanswered—how was she able to combat demons using nothing but her hands?

Her new lover, Roman, a gargoyle shifter, believes it’s because she’s she’s a witch. Ridiculous, right? She’s a cop, like her dad. But, normal cops don’t shoot bolts of energy at demons…

When she glimpses another supernatural threat, Larissa struggles with the vision. Is it her imagination tormenting her? Or worse—another premonition?

Lisa Carlisle is a USA Today bestselling author of romance and suspense.