You are here: Products Enter the Witch Doctor by Wayne Kyle Spitzer 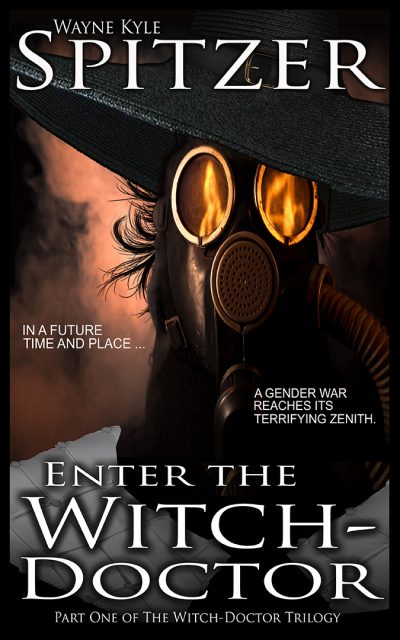 They were the kind of musical notes men and woman once swayed to—even worshiped to—or so Jasper had told him, ground from an instrument called an “organ”—which had once been common, or so he’d said, but had vanished from the face of the world. So, too, were there cymbals, which echoed throughout the crew compartment of the War Wagon like tinsel—if tinsel could be said to have a sound—and mingled with the steely whispers of their muskets and tanks and other gear as the truck rocked and their harnesses held them fast.

“When a maaan loves a woman,” sang a hearty and soulful voice both inside and outside the compartment, and Jeremiah knew they were close, else the driver wouldn’t have cued the music, and when he scanned the other Witch Doctors, strapped in six to a bench in the wagon’s cramped confines, he knew that they knew it too. What was more, he knew that, however fearsome they looked in their black jumpsuits and white flame-retardant vests, their goggled respirators, their buckled hats—they were frightened, too.

Wayne Kyle Spitzer (born July 15, 1966) is an American author and low-budget horror filmmaker from Spokane, Washington. He is the writer/director of the short horror film, Shadows in the Garden, as well as the author of Flashback, an SF/horror novel published in 1993. Spitzer's non-genre writing has appeared in subTerrain Magazine: Strong Words for a Polite Nation and Columbia: The Magazine of Northwest History. His recent fiction includes The Ferryman Pentalogy, consisting of Comes a Ferryman, The Tempter and the Taker, The Pierced Veil, Black Hole, White Fountain, and To the End of Ursathrax, as well as The X-Ray Rider Trilogy and a screen adaptation of Algernon Blackwood’s The Willows.

But then the wagon ground to a halt and there was no time to be feel anything, much less fear, as Jeremiah unbuckled and piled out with the others. And yet, as he paused momentarily to take in the building—a ramshackle six-story brownstone which looked as though it had been built before the Betrayal, much less the Pogrom—a strange thing happened. He thought he heard a voice; not from without but entirely from within—a woman’s voice, a witch’s voice. And it said to him, as faintly as the cymbals at the start of the music, Why have you come for us, Witch-Doctor? And he found himself scanning the illuminated windows of the brownstone as if someone had perhaps shouted to him (rather than reaching directly into his mind), and saw behind one of the uppermost panes a figure so small and motionless that he might have thought it a piece of furniture, a lamp, perhaps, had it not slid to one side and vanished.

Then he was activating his musket, which was connected to the tank on his back and shot not just explosive balls but streams of incinerating fire, and charging into the foyer—where a handful of witches already lay, writhing and smoldering. Fifteen minutes. That’s what they had before the Flyer lowered from the vespertine gloom and received them on the roof. He rushed into the first corridor, finding it already busy with Witch Doctors and choked in smoke, and instead of joining in located the door to the stairwell—whose steps he gained quickly, bypassing the second floor entirely (which he knew would be already under siege), and exiting onto the third level, where he was greeted by a gaggle of witches dressed in little more than rags, their white eyes focused solely upon him, their hands already joined, at which instant he raised his musket and fired, holding its trigger down as he swung his arm back and forth so that the women were consumed in flames instants before they were able to cast their spell.

How did it come to this, Witch Doctor? This war between Doctor and witch, man and woman, you and I?