You are here: Products Entangled by Julie Arduini 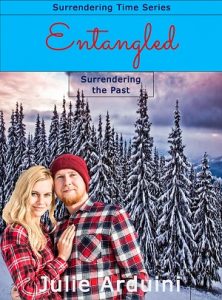 She lives in NE Ohio with her husband, two children, and secret stash of chocolate.

As I wrapped up writing Entrusted, I realized Jenna’s best friend, single mom and sheriff Carla Rowling, had a story. There was a loyal Speculator Falls resident that was interested in her, but she kept putting a wall up. I wanted to explore more. When the traditional publisher I was with at the time asked if I had a series, I knew what I wanted from a book three, and that question helped me see, Carla indeed had a story. She is book two, and her story was worth exploring.

Be the first to review “Entangled by Julie Arduini” Cancel reply